Editor-in-chief of the County Conscience

Disappointing his readers, being compared to Scrooge

"Don't you lump me with old Scrooge!"
"That's how we faced down rival clans in Scotland, nephew!"
Gideon McDuck, also known as Uncle Giddy[2], is Donald Duck's uncle and Scrooge McDuck's younger brother. Gideon is the editor-in-chief of the County Conscience, the most credible newspaper in Duckburg, and a business rival to his older brother Scrooge and his newspaper, The Duckburg Chronicle. He was created by Romano Scarpa in 1956.

Gideon grew up with his siblings in Scotland, as shown in Zio Paperone e le notizie... fraterne. According to his comic debut, he is also a member of the clan McDuck, and founded his successful newspaper (which has a gigantic office in Duckburg) "40 years ago". Gideon's newspaper notably has Jiminy Cricket as its mascot, representing the moralistic values of The County Conscience, as well as its constant hunt for the truth and honesty.

While he lacks his brother's love of gold (and even described his brother as a "money-grabbing robber baron" in his debut comic), Gideon values his morals and being honest to his readership, similar to the way his brother Scrooge treasures his fortune, and always knows exactly how many readers he has, similar to how Scrooge always knows exactly how much money he has. His primary goal is not to sell as many newspapers as possible, but to tell his readers the unfiltered truth. Gideon prides himself as the only independent news source in the state of Calisota (i.e. that has not been filtered through his brother). Gideon has an antagonistic relationship with his brother, who is jealous of Gideon's success, and often tries to buy Gideon's successful newspaper to get rid of the competition, only to be turned down every time. This is much to the frustration of Scrooge, as Gideon provides legit, honest competition, which Scrooge rarely gets.

Being the younger brother of the richest duck in the world, he often gets compared to his brother, much to Gideon's frustration. Instead, Gideon wants to be recognized by his own success and does not wish to be constantly associated with his wealthy brother.

Gideon is adamant on only giving his readers the "real news". His newspaper has a focus on crime-solving, which sometimes agitates the local police, who see him as meddlesome. Gideon has a strong dislike of trivial news like celebrity gossip and it infuriates him when the Duckburg public considers such things more newsworthy than important news like political events.

Gideon was introduced in the 1956 Donald Duck comic Shellfish Motives (Donald Duck #368-369), where he was one of the main characters. In this 50-page adventure, he employs his nephew Donald to find out the story behind a kidnapping for his newspaper. The story was written and drawn by classic Disney artist Romano Scarpa, who reused Gideon on multiple occasions. Throughout the years, Gideon has become one of the recurring members of the Duck family and has been used by various artists. Gideon often employs his relatives, such as his nephews Donald and Huey, Dewey, and Louie. In some of Gideon's more recent appearances, Dickie Duck (Glittering Goldie's granddaughter) works for him.[3]

Gideon's most recent appearance was in Flintheart's Secret, where he gets kidnapped by Scrooge's arch-nemesis Flintheart Glomgold. 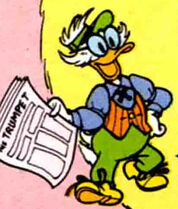 Gideon and Donald in Shellfish Motives. 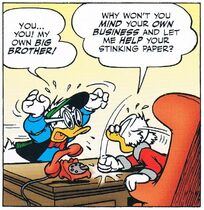 Gideon and Scrooge in Shellfish Motives. 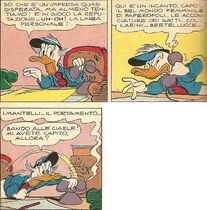 Gideon with his brother Scrooge and his relative Ludwig Von Drake. 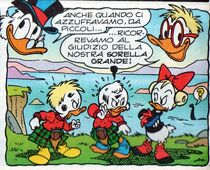 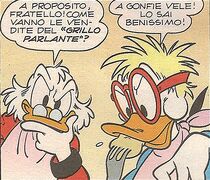 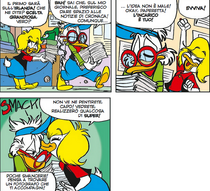 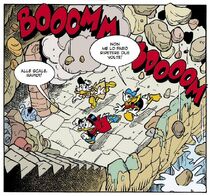 Retrieved from "https://disney.fandom.com/wiki/Gideon_McDuck?oldid=3517662"
Community content is available under CC-BY-SA unless otherwise noted.