Isle of the Lost

Gil is a character who appears in the Disney Channel films Descendants 2 and Descendants 3. He is the son of Gaston and starts as an antagonist but later reforms. 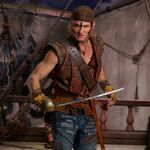