To prove to Goofy how smart he is

Being smart, proving to Goofy how smart he is

Couldn't answer the TV quiz correctly and ends being wounded up in kindergarten
Gilbert Goof is Goofy's nephew in classic Disney comic book appearances. He is a younger and smarter counterpart of Goofy.

Gilbert's first appearance occurred in a May 1954 comic book, where Goofy tells Mickey that he is expecting a visit from his nephew. However, he gets lost and ends up in a university, which then explodes After he performs a dangerous experiment. Later, Goofy and Gilbert attend a TV quiz. When Gilbert can't answer one of the questions correctly, he is sent back to kindergarten.

Since then, he made a number of comic appearances in the late 1950s and the 1960s. His notable comic appearances mostly features the adventures of Super Goof, Goofy's superhero alias. His recent comic book appearances features him playing soccer with Morty and Ferdie Fieldmouse, starting with The Homer (Mickey Mouse and Friends #263, 2004).

Unlike Max Goof, the son of Goofy in media external to the old comics, Gilbert has not made any appearances in animation, nor have he or Max ever appeared alongside the other in any official media. 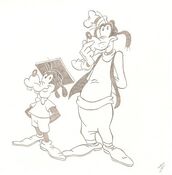 Gilbert with his uncle Goofy

Gilbert with Morty (or Ferdie?)

Retrieved from "https://disney.fandom.com/wiki/Gilbert_Goof?oldid=3582862"
Community content is available under CC-BY-SA unless otherwise noted.