Disney Wiki
Register
Don't have an account?
Sign In
Advertisement
in: Article of the week, People, Actors,
and 39 more
English

Gilbert Jeremy was best known for his Disney role as the voice of Iago in the Aladdin films and TV series. He made a guest star appearance in an episode of Hannah Montana. He also appeared on Muppets Tonight in Episode 207, alongside Dennis Quaid, and played Mike McNasty in Adventures in Wonderland. Additionally, he voiced Two-Bits in Bonkers, the Woodpecker in Timon & Pumbaa, Minister Clion in the Hercules TV series, himself in The Replacements, and another parrot in Beverly Hills Family Robinson.

Outside of Disney, Gilbert Gottfried was well-known for his voice roles as Digit in the 2002 PBS Kids show, Cyberchase and the Aflac Duck mascot in several TV commercials until March 2011, when he was fired for telling jokes about the tsunami/earthquake in Japan on his Twitter account. He also acted as Mr. Peabody in the Problem Child series and Abraham Lincoln in the 2014 western comedy film, A Million Ways to Die in the West. His other film credits include Beverly Hills Cop II, Thumbelina, Look Who's Talking Too, and Dr. Dolittle.

Gilbert Gottfried was also a semi-regular game show Hollywood Squares. In one memorable episode, the contestants had a difficult time trying to capture his square for a 5-square win, as he responded with their failed attempts with "You fool!".

On April 12, 2022, at the age of 67, Gilbert Gottfried died in the New York City borough of Manhattan from recurrent ventricular tachycardia that was complicated by type II myotonic dystrophy.

One of The Possums
(Bear in the Big Blue House)

Gilbert Gottfried with Kermit the Frog on Muppets Tonight.

Gilbert Gottfried behind the scenes of Aladdin. 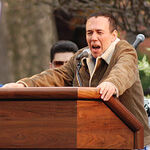 Gilbert Gottfried with his kids, Max and Lily at the premiere of Disneynature's Born in China in April 2017.