This article is about the character from Finding Nemo. For the villain in Kim Possible, see Gil Moss. For the Quack Pack character, see Gil.

Leader of the Tank Gang

Living in a fish tank

Gill is a Moorish Idol, and a major character in Disney/Pixar's 2003 animated film, Finding Nemo. He is the leader of the Tank Gang.

Gill is the maverick of the dentist's office fish tank. He is the leader of an eclectic gang of fish, who hang on his every word and are drawn to his magnetic personality. This tough, scarred, one-finned fish was raised in the ocean, but taken at a young age to live in a tank. Surrounded by fish who have spent their entire lives in "the box," Gill alone feels the pull to be free. Though he dreams of one day breaking out and returning to the ocean, his failed escape attempts have broken his spirit. With Nemo's arrival to the tank, Gill is inspired again to find a way back to the sea.

Gill's only dream is to escape the tank and back into the ocean. Clever and intelligent, Gill has made many escape attempts, but they have all failed miserably. The first time, he landed on the dental tools, giving him severe scars on his right side and destroying his right fin (similar to how Nemo has a little, deformed right fin). His numerous failures have shaped him to be a tough and brooding individual with a life of experience that actually helps Nemo discover that he indeed can do great things.

In the initiation sequence, it's evidenced that he can easily talk the other aquarium fish (who have no original pull to be free since they were raised in captivity) into his plans, which is likely how he started the gang in the first place. In a deleted concept meant for Finding Dory, he explains that he ramps them up with excessive optimism because he believes it helps them to do the mission and if they can't, then they can just "see where the mission takes them".

Unlike Marlin- who is overprotective and has trouble letting Nemo do big things, Gill sees potential in the young clownfish and encourages him to step out of his comfort zone to get the job done. However, he has an underprotective side and neglected to put himself in Nemo's shoes when it came to the escape plan due to his anticipation of finally getting out of the tank. When he realises that he nearly had him killed, he calls the plan off with no hope until Nemo tries again and succeeds. From then on, Gill is even more devoted to getting Nemo home and saving him from Darla.

In one of the end credits animations, Gurgle and Bloat are arguing and Bloat blows up. Gill- with a smile- beckons Gurgle to pass Bloat over to him, starting a short game of blowfish volleyball. This gives us a peek into his sense of humor.

Gill is an aging, thin, triangular moorish idol with a few deep scars on his right side along with a torn, ragged pectoral fin. He has mahogany eyes curtained by thick brows and a long snout that ends with a bump. His appearance is modeled after his voice actor, Willem Dafoe, especially the coloring around his mouth to imitate the deep wrinkles that Dafoe has on his face.

Unlike the other Tank Gang members, Gill had a neutral reaction to Nemo's entrance. Upon realizing that Nemo could fit through small tubes, Gill had an idea: since Nemo was the only one who's small enough to enter, he had to use a pebble to block the aquarium filter, which will quickly cause the water to get dirty, forcing the dentist to put everyone in plastic bags so he would clean it out, and then they'll all escape to the ocean. The rest of the gang is reluctant at first due to Gill's many failures, but once he explains it, they're all in, including Nemo.

Later, while they are waiting for Dr Sherman to leave the room, Gill spots Nemo staring sadly outside the office window and goes up to reassure him that his father is out there looking for him. Nemo says that his dad is too afraid of the ocean to go looking for him and Gill briefly looks down with sympathy. As Gill then asks Peach for an update on what Dr Sherman is doing, Nemo notices Gill's torn fin and scars. Gill explains that he got them from his first escape attempt and that all "drains lead to the ocean". He expresses his belief that fish are better off free instead of being stuck in a glass box, which has motivated him to make more escape attempts than he can remember. As the dentist leaves for a bathroom break, the mission begins as Nemo jumps into the filter and listens to Gill's instructions from the other side. Peach the starfish worries that this may not be the safest idea, but Gill insists that Nemo will be fine. However, something does go wrong: the pebble detaches from the gear, causing Nemo to nearly be sucked into the gears before the other fish save him by pushing a plastic plant into the tube for the clownfish to grab. Gill, shocked and horrified about the fact that he almost sacrificed the little clownfish, isolates himself, feeling guilty for nearly killing him.

Later, he apologizes to him for selfishly putting him into harm's way, stating he was so ready to finally be free, he didn't regard Nemo's safety. However, when Nemo hears his father's amazing achievements, he tries again, and Gill reacts with horror, especially after hearing a terrible sound of locked gears, but when he realizes that Nemo survived and has successfully blocked the filter, he is very proud of him. He calls the plan back on in full leader mode and the tank soon gets dirty and Gill congratulates Nemo for making it possible, but the dentist, during the night, installed a new filter, the AquaScum 2003, which cleaned it, ruining the plan again. He then captured Nemo with a net, but everyone saves him by hopping into it and swimming downwards, which Nemo learns to use later on, although he's then put in a plastic bag and his attempt to escape through the window fails, so when Darla arrives, he fakes his death. Gill is initially horrified, along with the rest of the Tank Gang, but when the little fish winks at him, they realize it's a trick. But instead of the toilet, he is about to put Nemo in the trash as Nigel with Marlin and Dory arrive in the nick of time. As they cause a ruckus to save Nemo, Darla picks up the baggie and starts shaking it violently. Gill makes an effort to rescue him by shooting himself out of the tank's artificial volcano and landing on Darla's head and then helps Nemo escape the office by flipping onto the dentist's mirror to catapult the clownfish into a spit sink leading to the ocean. After Dr. Sherman puts Gill back into the tank, the Tank Gang congratulates him on finally succeeding in helping Nemo return to the ocean and they all gladly watch Darla break the sink Nemo went through and get harshly sprayed in the face.

At the end of the film, Gill and the other Tank Gang members manage to escape from Dr. Sherman's office. Since Dr. Sherman's new AquaScum 2003 has broken, the fish tank has become filthy again, and now he has to take his fish out, put them in bags, and clean the tank himself, and while he complains to Barbara about the device breaking when it has a lifetime guarantee, Gill and the others make their way out of the office. They are seen having crossed the street and jumped into the ocean to their freedom, although still trapped in the plastic bags.

Gill, along with the rest of the Tank Gang, appears in the post-credits scene. They are still trapped in their respective bags, now covered with algae, and then rescued by the Marine Life Institute volunteers.

"I was so ready to get out, so ready to taste that ocean, I was willing to put you in harm's way to get there. Nothing should be worth that. I'm sorry I couldn't get you back to your father, kid." 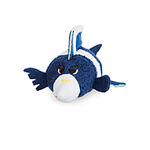 Gill's escape plan finally succeeds...except they're still stuck in plastic baggies, with no idea how to get out of them.

A set of Christmas ornaments that came with a storybook

"Well, you're lucky to have someone out there who's lookin' for ya."

"From this moment on, you will now be known as..."