Scotland
Gillecomgain is a character in Gargoyles. He was a man living in Scotland in the end of the 10th century and the beginning of the 11th century. He became the first Hunter.

After the two were wed, the Prince asked Gillecomgain to murder Macbeth, but he refused and implied he would reveal Duncan's treachery. Duncan, enraged, sent Macbeth after Gillecomgain, revealing him as Findlaech's murderer. Macbeth sought out Gillcomegain at Castle Moray and the two battled. Demona, present at the urging of the Weird Sisters, discovered that Gillecomgain was the Hunter and threw him from the battlements. Gillecomgain, in a final vengeful attempt, tried to drag Demona to her death, but she was saved by Macbeth, and Gillecomgain fell to his death. 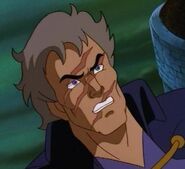 Retrieved from "https://disney.fandom.com/wiki/Gillecomgain?oldid=2085612"
Community content is available under CC-BY-SA unless otherwise noted.