Joe Locicero (2019-preent)
Gina Alexis Rodriguez is an American actress, voice actress, director, producer, screenwriter, and model. She is best known for her role as Jane Villanueva on the CW series Jane the Virgin. She also played Andrea Fleytas in the 2016 drama Deepwater Horizon. She provided several voices for animated films, such as Una the hedgehog in the 2017 Blue Sky Studios animated film, Ferdinand, Mary from 2017 Sony Animated film, The Star and Kolka from the 2018 Warner Bros. animated film, Smallfoot. She currently voices the title character in the Netflix TV adaptation of Carmen Sandiego and Velma Dinkley in the 2020 animated film, Scoob.

For Disney, she voices Princess Marisa in Disney Channel/Disney Junior animated series Elena Of Avalor and portrays the future version of Elena Cañero-Reed in Diary of a Future President. 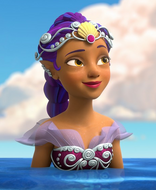 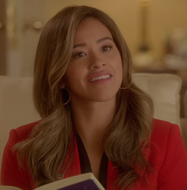 Gina Rodriguez speaks at the Jane the Virgin panel at the 2014 Summer TCA Tour.

Gina Rodriguez attending the 2019 D23 Expo.
Add a photo to this gallery
Retrieved from "https://disney.fandom.com/wiki/Gina_Rodriguez?oldid=4168013"
Community content is available under CC-BY-SA unless otherwise noted.