Delilah
Gina Torres is an American television and movie actress. She is well known for her roles in films and TV such as Jessica Pearson on the USA drama Suits and Brenda Cooper in the 2007 comedy I Think I Love my Wife.

For Disney, she voiced Ketsu Onyo in Star Wars Rebels and Star Wars: Forces of Destiny. She also appeared in ABC Studios TV shows like Castle as Penelope Foster, The Catch as Justine Diaz, and Revenge as Natalie Waters.

In 2017, she became the host of Mission: SPACE, at Epcot in Walt Disney World. She will play as Chatana in Elena of Avalor. 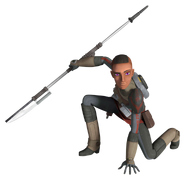 Chatana
(Elena of Avalor)
Add a photo to this gallery 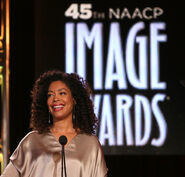 Gina Torres speaks on the Pearson panel during the 2019 Winter TCA Press Tour.
Add a photo to this gallery
Retrieved from "https://disney.fandom.com/wiki/Gina_Torres?oldid=3851232"
Community content is available under CC-BY-SA unless otherwise noted.