Guinevere, in anthropomorphic form, as King Arthur's love interest from the stories of English Arthurian legend

To have Arthur as her mate (failed)

The wolf eating Arthur, the fact that Arthur is really a human, not a squirrel

Heartbrokenly watches Merlin and Arthur return to the castle, in tears.
The Girl Squirrel[1][2] (also known as Lady Squirrel[3]) is a minor character in Disney's 1963 feature film The Sword in the Stone who first appeared seeing Arthur as a squirrel quickly fell in love with him.

Though her appearance was brief, the little squirrel was excited, cheerful and determined to make Arthur her mate and earn his love. She was dedicated to Arthur enough to save him from the wolf. She was heartbroken when she learned Arthur was not a squirrel but a human boy.

In the film, the little girl squirrel is first seen meeting Arthur as a squirrel eye to eye, face to face, when the both of them were running up to each other. After greeting her with a smile, Arthur then looked down both ways, and the female wouldn't let him get by, at first thinking she wanted to move past him. Immediately after moving out of her way, she came to and started sniffing him, then after he placed his hands on her nose to keep her away, she did the same to him and tried to keep his hands on her, thinking it was a game. Merlin confirmed for Arthur that she had become in love with him. Later, she keeps pestering him, even though Arthur tried to keep her away from him and told her that he was a human boy, not a squirrel, but she either didn't understand him or was too excited to listen. Also, when Arthur put her tail on herself, pushed her and ran off, she picked it up and looked at Arthur while giggling, and then chittered, "Ooohh!" (like an in-love sound). She even grabbed him by the face and kissed him (three times). Also, while chasing Arthur (who hid in Merlin's tail), the little girl squirrel went over to Merlin and smiled (which meant that she kindly asked him where Arthur went), and Merlin pointed at his tail, and the female found Arthur and continued harassing and chasing him all over the place, with Merlin singing "A Most Befuddling Thing".

While chasing Arthur, when she saw the wolf getting ready to eat him, she saved Arthur by chewing on the wolf's leg, causing him to yelp in pain. He then chased her, trying to bite her tail, but she managed to escape by making the wolf fall down a hill into a log and end up floating down a river stuck in the log.

The female squirrel was then found behind a rock nuzzling Arthur, glad that he was still alive. However, when Arthur turned back into human form (thanks to Merlin), she was heartbroken, ran up to her tree hole, and started crying. She tearfully watched as Arthur and Merlin headed back to the castle from her treetop. Her fate remains unknown after this as she is not seen again in the rest of the film. 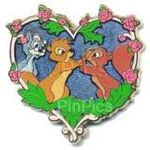 Pin of Arthur and Merlin (as squirrels) with the female squirrel