Rat colony
Ratthew, also known as Git, is a supporting character in in the 2007 Disney/Pixar animated feature film, Ratatouille. He is a muscular lab rat and a member of a rat clan headed by Django. He is voiced by Jake Stenfield.

Ratthew is very strong compared to the other rats, and is easily the largest rat in his colony. He is a close friend of Emile, Remy's older brother as well as the right-hand of Django.

He is first seen helping Remy board a makeshift boat Django was in to escape from Mabel, but is unsuccessful, as Mabel fires on the spatula he is holding and causes him to lose his grip on it. Later on, when Remy is reunited with the rest of the clan, Emile told Ratthew and his friends about Remy, causing them to ask Remy to steal food from the Gusteau's restaurant for them. Remy begrudgingly does so, only to see more and more rats coming to Remy to ask for food.

When Remy gets into an argument with Linguini for denying him credit, Ratthew notices this and jokingly states that Linguini is like a "fluffy buddy" of Remy. Remy, who is still angry at Linguini, plans to steal food for the whole clan. However, Linguini catches Remy doing so and chases him and the rest of the clan out of the restaurant. Remy is later captured by Skinner, who, after knowing of Remy's exceptional skills as a cook, intends to force Remy to make a new line of frozen foods for him.

Emile informs Django of Remy's capture, who promptly rescues Remy with the help of Ratthew. Ratthew uses his enhanced physical strength to push a statue off a building, causing it to land onto Skinner's car trunk where Remy is being held. After being rescued, Remy races back to restaurant to help Linguini. Linguini reveals to his staff that Remy is the true cook, causing all of them to walk out and quit their jobs.

Seeing this, Django orders his clan to help Remy cook. Remy assigns groups of rats for different tasks, with Ratthew being assigned to tenderize meat. After capturing the health inspector, the rats tie him up and throw him into the freezer, with Ratthew closing the door shut.

After the closure of Gusteau's, Ratthew now hangs out at La Ratatouille, showing baby rats his muscles. 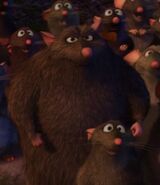 Git with the rat colony