The Gizmoduck Suit, or Gizmosuit, is the cybernetic armor worn by Gizmoduck. It was built by Gyro Gearloose in the multi-part DuckTales episode "Super DuckTales".

After being forced to move his Money Bin to a location farther away from his mansion, Scrooge McDuck requested Gyro to build a robot who could guard the Bin from robbers. After Gyro's first attempt, the GICU-2 proved to be too efficient at preventing anyone, including Scrooge, from getting close to the Money Bin, Scrooge ordered Gyro to build a new security guard that would have a brain. Gyro proceeded to build a cybernetic suit that would be "bulletproof, fireproof, and knuckleproof." However, due to Scrooge saying that he wanted a security guard with a brain, they would need to hire a person to wear the suit. And to prevent the suit from falling into the wrong hands, Gyro programmed it to be activated by use of a secret code word that he figured nobody but the wearer would ever use - "blatherskite."

As fate would have it, Scrooge's new accountant, Fenton Crackshell was at the moment having trouble trying to retrieve Scrooge's Number One Dime after it was stolen by the Beagle Boys. Upon overhearing Scrooge and Gyro talking about it, Fenton decided to borrow the Gizmosuit and use it against the Beagles. In his attempt to put the suit on, Fenton uttered his catchphrase, "Blabberin' blatherskite," unaware of the second word being the trigger word for the suit, and officially became Gizmoduck for the first time. From then on, Fenton always uses "blabberin' blatherskite" to become Gizmoduck, despite only needing the second word; it is possible that he does not realize he doesn't have to say the entire phrase.

Once the Gizmosuit has been donned, the only way to extricate oneself from it is to intercept the electronic signal sent to a television by a television remote control. Fenton discovers this while standing in front of his mother's television, after having previously been made to sleep in the carport.

Aside from Fenton, several other DuckTales characters have also worn the Gizmosuit at least once. In the third part of "Super DuckTales", Fenton's mother accidentally ended up wearing the suit when she shouted her son's catch phrase after he accidentally destroyed her TV. She would wear the suit again in "The Duck Who Knew Too Much". Launchpad McQuack has also worn the Gizmosuit at least twice, in the episode "A Case of Mistaken Secret Identity" and the Disney Adventures comic story "A Switch in Time" (in which Scrooge had Fenton and Launchpad switch jobs). Additionally, in "New Gizmo-Kids on the Block", Mrs. Crackshell accidentally shrank the Gizmosuit, which also somehow resulted in the code word being shortened to "blah." Due to this, Huey, Dewey, Louie, and Webby all ended up wearing the suit over the course of the episode.

When Gizmoduck appeared on Darkwing Duck, the Gizmosuit had a noticeably altered design; it was somewhat smaller and lacked the black coloring in the upper arms. This may be because, in the DuckTales episode "Attack of the Metal Mites", the suit was eaten by Flintheart Glomgold's Metal Mites, and thus it was slightly redesigned when it was repaired.

The Gizmosuit reappears in the 2017 DuckTales reboot series. It is noticeably bulkier than the iterations from the original continuity, and also noticeably lacks the TV screen on the front, but also has a "G" emblem like the one from the "quack 2" Gizmosuit seen in Darkwing Duck #8 (see below). The end of the episode "The Great Dime Chase!" shows Gyro pondering about making the suit under the name "Project Blatherskite".

In "Beware the B.U.D.D.Y. System!", Gyro has gotten around to making the suit, but it is still in its prototype stage and refuses to let anyone (aside from his interns) see it. Like before, whoever says the suit's code word will activate the suit and become the suit's wearer; currently, however, it only responds to Fenton's voice.[1] When Fenton needed to save Gyro and company from an out-of-control robot, he utters the code phrase to summon the suit, becoming Gizmoduck for the first time. Gizmoduck has trouble on using the suit as it has not been tested before. Fortunately, the suit has an assistance program to warn Gizmoduck and respond to his requests. Launchpad, Dewey, and Gyro are made aware that Fenton used the suit. After returning the suit, Gyro has Fenton agree to keep the project under wraps but can use the suit whenever he is Gizmoduck. However, Mark Beaks takes a dark interest in the suit for his own.

In "Who is Gizmoduck?!", Fenton attempts to use the suit to stop a bank robbery, but due to not having mastered the suit, accidentally destroys the bank. During a test run at Gyro's lab, Fenton excuses himself with a lab break so he can master its abilities on his own. However, Gyro and Huey discover Fenton, and Fenton accidentally fires a missile at Beaks's helicopter. After Fenton saves Beaks, Beaks proposes that Fenton work for Waddle as Waddleduck. Fenton refuses, but he is soon fired by Gyro, so he accepts Beaks's proposal. With the Gizmosuit rebranded as the Waddleduck suit, Fenton "aids" Duckburg citizens in mundane tasks. During one such task, he attempts to stop a Beagle Boy heist on his own, but is overridden. He decides to quit the job, but Beaks steals the suit and the mantle of Waddleduck for his own. As Beaks unveils himself as Waddleduck, Fenton tries to warn him, but Beaks ignores Fenton and the suit goes haywire. Donning the suit himself, and with Huey making Fenton's brain the core processor, Fenton seemingly sacrifices himself. In the hospital, however, Scrooge and Gyro present a new Gizmosuit for him to don and save Duckburg under Scrooge.

In "The Shadow War!", Fenton summons the Gizmosuit to stop his shadow once Magica summons every Duckburg citizen's shadow. However, his shadow dons the suit and incapacitates Fenton before joining Magica. Fenton's shadow, still in the suit, later confronts Donald Duck in the Money Bin. The suit is never seen afterwards.

The suit's operating system was voiced by Jim Rash.

In "The Legend of the Chaos God", when Solego attempted to possess Fenton, he called for the Gizmosuit, only for Solego to take control of the suit himself. Solego used the Gizmosuit to get himself to St. Canard and merge his medallion back with its gold setting, releasing him from the medallion. In the chaos that followed, Fenton regained control of the Gizmosuit, but it was then blown up by Solego. Fortunately, once Darkwing Duck defeated Solego, the Gizmosuit was restored back to normal.

In the 2010 Darkwing Duck comic book's first arc, "The Duck Knight Returns", it was revealed that Taurus Bulba tried to take control of the Gizmosuit (which had been left at Gyro's because at this point, Fenton was off attending a "MacGuffin convention"), but since he had become a machine himself, the Gizmosuit did not register Bulba as a person. Bulba planned to find a lackey and make them wear the Gizmosuit until he could access it himself, but to avoid chances of that happening, Gyro changed the secret code word. However, the new code word he chose turned out to be Gosalyn Mallard's catch phrase, "Keen gear," and thus, when she said the phrase near the suit, she took control of it, becoming Gosmoduck. Darkwing, Launchpad, and Gosalyn agreed that she would hold on to the Gizmosuit, but she would only use it in case of an emergency. However, in the comic's second arc, "Crisis on Infinite Darkwings", the Gizmosuit was destroyed during Darkwing, Gosalyn, and Morgana Macawber's battle against Negaduck and Magica De Spell.

In the comic's final arc, the "Dangerous Currency" crossover story, Gosalyn returned the broken Gizmosuit to Scrooge, and he had Gyro and Honker Muddlefoot repair it. Due to Fenton being captured at this point, they also modified the suit so that it would send out a signal and retrieve Fenton from his whereabouts. Unfortunately, the suit was then stolen by Megavolt and the Beagle Boys and brought to the Phantom Blot's hideout where Fenton was being held captive. The villains then had Gizmoduck transformed into a monster by the slime, but he was fortunately reverted back to his normal form by his mother yelling at him and was able to escape. However, "Dangerous Currency" was retconned as being non-canon (and as such was not reprinted in Darkwing Duck: The Definitively Dangerous Edition).

Canonically, the comic's continuation under Joe Books shows Fenton wearing a new "quack 2" Gizmosuit, seen in the two-issue story arc "Dawn of the Day of the Return of the Living Spud". The new Gizmosuit is now balanced on a much slimmer wheel than its predecessor, is able to project shadowy images against the clouds in the sky (in reference to Batman's Batsignal), includes a jet-pack, and also has an emblem resembling a "G" in place of the "R" emblem from the original suit. The story does not elaborate on how Fenton obtained the new armor, but writer Aaron Sparrow confirmed that Gyro built it using parts scavenged from technology that Launchpad had crashed planes into.[2]

In the video game DuckTales Remastered, the Gizmosuit is taken apart when Fenton gets kidnapped by the aliens on the Moon level. To progress through the level, Scrooge has to travel through the aliens' spacecraft to find the parts of the Gizmosuit. 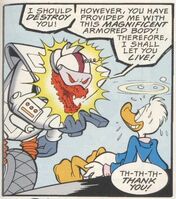 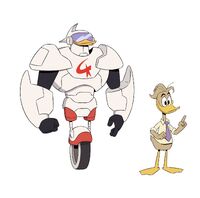 Retrieved from "https://disney.fandom.com/wiki/Gizmosuit?oldid=4491933"
Community content is available under CC-BY-SA unless otherwise noted.