For the publishing company named after this character, see Gladstone Publishing.

Bad luck, being outbested and outwon by Donald, Daisy and other girls rejecting him

“I am the best at getting something for nothing!”
―Gladstone Gander[src]

Gladstone Gander is a character created by Carl Barks who made his debut in the Donald Duck comic Wintertime Wager in Walt Disney's Comics and Stories #88 (first published in January 1948). He is a lazy yet extremely lucky goose who acts as the antithesis to his perpetually unlucky cousin, Donald Duck.

Gladstone's luck defies probability and provides him with anything he desires, with hardly the need of effort. As Disney comics writer and artist Don Rosa has commented on the character:

For all his ridiculous amount luck Gladstone has no achievements to be proud of, is very lazy, and has no true ambitions or calling in life, as he is incapable of long-term planning. All of this is in stark contrast to his relative Scrooge McDuck, who is also capable of taking advantage of opportunities but works hard to create situations favorable for him, is strongly motivated by his ambitions and takes huge pride in forming his fortune by his own efforts.

He is a rival of Donald for the love of Donald's girlfriend Daisy Duck. Gladstone is also considered among the prime candidates for becoming Scrooge McDuck's successor. For all of these reasons, he and Donald have formed an intense rivalry with each other. Gladstone's arrogance and outrageous luck, combined with Donald's own ego and belief he can still best him despite all odds have set the stage for many stories featuring the two cousins' confrontations.

His exact place on Donald's family tree is somewhat uncertain. In the Duck family tree Carl Barks created for personal use sometime in the the 1950s, Gladstone was the son of Luke the Goose and Daphne Duck, who died from overeating at a free-lunch picnic. He was then adopted by Scrooge McDuck's sister Matilda McDuck and Goosetave Gander.

When Barks was requested to write out a Duck family tree in the 1990s, being unaware of his previous tree, he didn't use the adoption story, which was never featured in any story (even though no stories denying the event were published either). However, in one of his later interviews, Barks stated that Donald and Gladstone's mothers were sisters, making Gladstone Donald's maternal cousin,[5] which corresponds more to his original 1950s tree. In a more recent version of the family tree created by Don Rosa, Daphne Duck (Donald's paternal aunt) married Goosetave Gander, and the two were Gladstone's parents. As well as Barks earlier family trees, this is consistent with what Gladstone says in Race to the South Seas: "Scrooge McDuck is my mother's brother's brother-in-law". In The Sign of the Triple Distelfink (first published on February 4, 1997), Don Rosa added that Gladstone was born on Daphne's birthday, who was born under the protection sign of the Triple Distelfink, thus inheriting his mother's luck. It's implied that Gladstone was very spoiled when growing up.

Barks gradually developed Gladstone's personality and at first used him frequently—in 24 stories between 1948 and 1953, the first five years of his existence. Gladstone's luck evolved slowly. In his first three appearances in 1948 (Wintertime Wager, Gladstone Returns, Links Hijinks), he was portrayed as the mirror image of Donald: an obstinate braggart, perhaps just a little bit more arrogant. In his next two appearances, Rival Beachcombers and The Goldilocks Gambit, Gladstone is portrayed as merely lazy and irritable, and also gullible. The breakthrough of his lucky streak occurs in December 1949, and the long adventure story Luck of the North. His and Donald's rivalry over Daisy is established in Donald's Love Letters (1949), Wild About Flowers (1950), and Knightly Rivals (1951), and as potential heirs to Scrooge's fortune in Race to the South Seas (1949), Some Heir Over the Rainbow (1953) and Searching for a Successor (1955). By then, Gladstone had already found a steady place in the Donald Duck character cast, and was used by numerous other Disney comic creators in their stories. His first appearance by a Disney comic artist other than Barks was in 1951's Presents For All, by Del Connell and Bob Moore. Gladstone continued to be a recurring character in Barks' work until Barks' retirement. In his final story featuring Gladstone, The Not-so-Ancient Mariner (1966), Barks notably updated Gladstone's appearance to the beatnik trends of the 1960s, giving him a black beret, turtleneck sweater, long hair and a goatee.

Outside of comics, Gladstone appeared in several episodes of DuckTales, where he was voiced by Rob Paulsen and is seemingly more sympathetic than he is in the original comics. In the episode "Dime Enough for Luck", Gladstone is an unwitting stooge for Magica De Spell in one of her attempts to steal Scrooge's Number One Dime. He returns in the episode "Dr. Jekyll & Mr. McDuck", where he accidentally bids on an item that turns out to be valuable. This inspires Scrooge to bid on the next item—a trunk containing Dr. Jekyll's formula—which sets the plot in motion. He also makes non-speaking cameo appearances in the episodes "Sweet Duck of Youth" and "Till Nephews Do Us Part".

Gladstone returned for the reboot of the original 1987-1990 series. Like most of his previous appearances, he is supernaturally lucky, and every bit as lazy and arrogant. The series marks the first time Gladstone and Della Duck interacted onscreen, as well as the first animated media in which Gladstone interacted with Donald (not counting his protoptype in The Spirit of '43), Daisy, and Fethry Duck. Because of his habit of receiving everything while doing nothing, Gladstone is viewed as a "common enemy" for Donald and Scrooge. His design has also been given a more modern update. He first appeared in the episode "The House of the Lucky Gander!" and made a cameo in the episode "The Shadow War!". A running joke is how he always seems to find $20. Unlike the other incarnations, he doesn't have a crush on Daisy.

In the episode "Treasure of the Found Lamp!", he wants to buy a lamp but at first does not have any money. Just, then $20 appear in his wallet, so he buys it. On his way he bumps into Doofus Drake who wants to buy the lamp, but Gladstone is not interested in money so instead he trades it for a blimp which becomes his home.

He reappeared in the season finale "Moonvasion!", where he was able to evade the Moon invaders when his blimp was blown faraway from them. He later rescued Huey, Dewey and Louie and joined Scrooge's army against the Moon invaders.

His next appearance was in the episode “The Phantom and the Sorceress!”, where the titular Phantom Blot stole his luck via a magic-absorbing glove, therefore stripping him of his luck (and revealing that his luck is actually supernatural or a form of magic or). He joins in Webby Vanderquack, Lena Sabrewing, and Violet Sabrewing‘s quest to team up with Magica De Spell to stop the Blot, but spends most of the adventure complaining about his loss of his good luck. When he grabs Magica’s amulet and tries to use it against the Blot, he ends up holding it backwards and zapping himself with it, turning him into a copy of Donald, much to his dismay. At the end of the episode, the Blot’s glove is destroyed, releasing all of the magic he stole, including Gladstone’s luck, making the latter a lucky duck again. He catches Magica bridal style after a battle with Lena and hits on her, but she turns him away in disgust.

His final appearance was in the series finale, "The Last Adventure." He attends Webby's birthday party at Funzo. When Featherly inadvertently reveals to Della that Donald and Daisy are planning a trip together, Gladstone remarks he sees a twenty dollar bill and drags Featherly away.

Gladstone made a cameo appearance in the House of Mouse episode "Goofy for a Day", in the Penguin Waiters advertisement.

Gladstone also appears in the video game Donald Duck: Goin' Quackers! in his traditional role as Donald's rival for Daisy's affections, in this, they both compete to rescue Daisy from Merlock. All throughout, Gladstone will pop up before a boss battle, only to get tossed aside and declare "Hey, I found a nickel!" By the end of the game, he somehow manages to get a broken leg. In this game, he was voiced by Corey Burton, who gave Gladstone a Brooklyn accent. The game's animated cutscenes marked the first time Gladstone and Donald have ever interacted in animation.

Gladstone made a rare appearance during Donald Duck's 50th Birthday Parade at Disneyland California in 1984, alongside Donald, Daisy, and other members of Donald's family (Uncle Scrooge, Grandma Duck, and Ludwig Von Drake).[6] This appearance notably preceded his animated debut by several years.

Gladstone in Carl Barks' Race to the South Seas, one of Gladstone's earliest appearances.

Daisy with Gladstone in the 2011 DuckTales comic book.

Young Gladstone and his parents in the Dutch illustration Uit het Plakboek van Guus Geluk ("From the Scrapbook of Gladstone Gander"). The caption translates into "My parents were the luckiest ones of all because, come on, they had ME."

Gladstone with his nephew and his two female cousins. 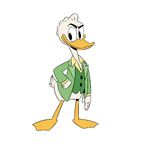