1981-2010
William Glenn Shadix was an American actor and voice actor. He was best known for his role as Otho Fenlock in Tim Burton's horror/comedy film, Beetlejuice.

For Disney, he provided the voice of the Mayor of Halloween Town in The Nightmare Before Christmas, Ray Gherkin in the Dinosaurs episode "Scent of a Reptile", a Monster in the Dinosaurs episode "Driving Miss Ethyl", and Dr. Emile Crocker in the Quack Pack episode, Pardon My Molecules. He also portrayed Chet in The Parent Trap IV: Hawaiian Honeymoon.

On September 7, 2010, Shadix accidentally fell at his condominium in Birmingham, Alabama, and died of blunt trauma to his head. He was only 58 years old. 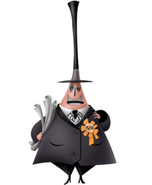 Mayor of Halloween Town
(The Nightmare Before Christmas) 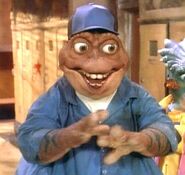 Producer
(Lilo & Stitch: The Series)
Add a photo to this gallery
Retrieved from "https://disney.fandom.com/wiki/Glenn_Shadix?oldid=4013151"
Community content is available under CC-BY-SA unless otherwise noted.