Globby is a recurring character in Big Hero 6: The Series. He was once a common purse thief until a freak accident with Honey Lemon's chem-purse and an experimental neurotransmitter mutated his body. Globby once served as a henchman to Obake, until reforming and becoming an ally to Big Hero 6.

Globby was once a common thief known as Dibs. He was considered by many a terrible thief, due to being unsuccessful in stealing. One day he stole Honey Lemon's chem-purse and came across an expensive neurotransmitter (based on Hiro's transmitter for the Microbots) built by Krei Tech Industries in a secret lab. He tried to steal it so he could get some money out of it, but then accidentally broke Honey Lemon's chem-purse. Chemicals mixed into purple goo burst out and consumed Dibs' entire body, due to wearing the neurotransmitter which could control anything linked to it with the mind. Dibs at first struggled to control his mutation but eventually mastered it once he figured out how to work the neurotransmitter. Instead of wanting to cure his condition he decided to embrace it by becoming a supervillain.

By the events of "Failure Mode", Globby got better at controlling his mutation and soon discovered that he could shapeshift and manipulate his molecules into anything just by using his thoughts. These newfound abilities were enough to easily defeat Big Hero 6.

At the start, Dibs was crooked but ultimately harmless. His clumsiness made him more of a public nuisance than an actual menace, much to his embarrassment. With such a poor reputation, Dibs lacked respect from his peers (and evidently his own mother) which motivated him to attempt grand thefts in hopes of earning approval.

Following his mutation, Globby steadily began to develop. As he grew more accustomed to his mutated form, Globby's confidence began to rise, which furthered his concentration, and therefore, his competence. This led to him evolving from a bumbling thief to a powerful supervillain; so much so, that he has singlehandedly defeated Big Hero 6 on numerous occasions.

For all his fervor as a supervillain, Globby stood out for his light-hearted disposition. Unlike his villainous cohorts, Globby kept his conscience and capacity to care for others, particularly with his only boyfriend, Felony Carl. Since this conflicted with Obake's diabolical plan to wipe out San Fransokyo and everyone in it, Globby found he couldn't go through with something so dangerous and chose to change the path he set out on. In doing so, he finally found acceptance from the people he helped, and a kindred spirit in Honey Lemon.

Dibs was a man of average height. He had tan skin, blue eyes and blonde hair. He typically wore a green jacket over a gray shirt, black pants, and gray shoes. When committing his thefts, Dibs would don a black mask to hide his identity.

Globby's neutral form is covered entirely in purple slime. The neurotransmitter that triggers his abilities is situated around his forehand and green lenses cover Globby's eyes, making them out to be green. His abilities allow him to shapeshift into an authentic duplicate of any form his mind can conceive.

Globby first appears in "Baymax Returns", where he is being tortured by Yama and his thugs for not paying his debt on time. He is spared from death when Yama gets a call from Obake.

Globby later appears in "Big Roommates 2", where he steals Honey Lemon's purse and Alistair Krei's neurotransmitter, resulting in his accidental mutation. He tries to force Alistair Krei to teach him how to properly utilize his powers, but Big Hero 6's interference causes him to have a mental breakdown. Honey Lemon comforts Globby by ensuring that his life can get better from there, despite his low self-esteem. In a twist of events, this motivates Globby to better his life by becoming a fearsome supervillain.

At some point following his descent into villainy, Globby becomes an accomplice of Obake, a master criminal. In "Failure Mode", Obake orders Globby to retrieve a priceless painting from the San Fransokyo Museum of Art, though Big Hero 6 is there to stop him. Unfortunately for the heroes, Globby learns to master his abilities, making him a truly formidable foe. He succeeds in stealing the painting, and delivers it to Obake, who reveals that he really wanted the schematics for a device hidden behind the painting. Obake, upon examining Globby's sticky substance, notes that further study will unlock even more of his potential.

Globby returns in "Kentucky Kaiju". His powers have improved since his last encounter with Big Hero 6, he is sent by Obake to break into a bank as part of one of his plans. Upon arrival, he waits for Big Hero 6 to show up and attacks them, specifically focusing on Hiro. He starts by separating him from Baymax to how well he does without him, throws him into the vault with Fred and locks them both inside. Globby transformed into a Bull-like creature and rams into Go Go. Honey lemon throws a Chem-ball at him, but Globby quickly absorbs it and turns into a crystal spear which he throws at Hiro, nearly impaling him through his face but the boy was saved thanks to Honey Lemon. After Baymax and Fred broke free from the vault, Globby makes his escape while mocking Hiro that he's useless without his robot and his friends since they got powers while he does not. He then returns to Obake's lair, where his benefactor was pleased with his handiwork, stating his sole intent was to plant a seed of doubt in Hiro's mind and to see how he'd react. The next day, Globby watches footage of Hiro's fight with Noodle Burger Boy. Obake was disappointed that the boy gave himself superstrength; Globby comments that he would have chosen laser eyes, prompting Noodle Burger Boy to show off by shooting his own laser eyes at Globby. Eventually, following Big Hero 6's defeat of the Kentucky Kaiju, Obake informed his henchmen that the whole purpose of his strategem was to determine Hiro's level of intelligence.

Globby is later sent to procure a Krei Tech briefcase containing a damaged Energy Amplifier in "Countdown to Catastrophe", and engages in a brief scuffle for it with Hiro and Baymax. When Hiro incapacitates Globby and secures the briefcase, Globby escapes before the heroes could apprehend him. When Alistair Krei was reported to be introducing a new energy amplifier, Globby, Noodle Burger Boy, and Momakase interrupt the ceremony to steal it and are met with opposition from Big Hero 6. During this, Globby demonstrates his newfound ability to shapeshift into dinosaurs, allowing him to help his allies overwhelm the heroes and abscond with the briefcase. Once they return to the lair, the villains open the briefcase to find it empty and realize the ceremony was a decoy. It turns out Obake was counting on this, as he then sends Globby, Noodle Burger Boy, and Momakase to attack SFIT on Presentation Day to distract Big Hero 6 while he steals the real amplifier Hiro was working on.

After Obake has Hiro brought to his lair, Globby is shown playing a card game with Noodle Burger Boy. Globby is present when Obake unveils his goal to wipe out San Fransokyo to create his own "paradise". Upon hearing his provider's atrocious plot, Globby is horrified and decides to turn himself around. He rescues Hiro from Obake's confinement and defeats Momakase (who had earlier expressed disgust towards Globby) by pinning her to the wall. Globby then reunites Hiro with his team and they set out to deactivate the energy amplifier. Although they succeed in this, Obake's device manages to create a massive shockwave from San Fransokyo's bay. For his part in stopping the shockwave, Globby is dispatched with Honey Lemon to form a barrier that will sustain the blast from engulfing San Fransokyo. Honey Lemon thanks Globby for his bravery while Globby asks Honey to send his regards to Felony Carl in case he doesn't make it. Honey Lemon agrees to and she throws him a chem-ball that forms a heart, making Globby happy. As the two shock waves collide, Globby endures the pressure from the ocean and piercing of several ships to force back the water. With the catastrophe averted, Globby waits with Honey Lemon, Go Go, and Wasabi on shore until they spot the others return. Globby then celebrates Obake's defeat by taking part in a group hug with Big Hero 6, although Wasabi is visibly repulsed by Globby's ooze getting over him.

In "Nega-Globby", Globby has trouble finding a job in his current form. While Honey Lemon worked on a cure, Hiro managed to get Globby a job at Lucky Cat Café, though his slime tended to get into the patrons' orders. Eventually, Honey Lemon, with help from Karmi, managed to restore Globby to human form. Retaking his former identity as Dibs, he met with Felony Carl to celebrate, though he realized how much he missed being Globby.

Dibs later happened on the Big Hero 6 confronting a Globby-like monster which everyone initially believed to be Dibs suffering a remission; Fred dubbed the monster Nega-Globby. With Nega-Globby overpowering Big Hero 6, Dibs stole Honey Lemon's chem-purse and became Globby again and fought against his doppelganger. Honey Lemon eventually helped Globby with a new, prototype chem-purse, drawing Nega-Globby into attacking her, at which Globby devours him whole. Subsequently, Globby was praised by San Fransokyo as a hero, unaware that Nega-Globby is alive and part of him.

In "The Fate of the Roommates", Hiro and Fred consult Globby and Felony Carl for some information on the Maximum Insane Driving Challenge. Carl says that Mr. Sparkles is running some racing challenge for well-to-do thrill seekers, or basically rich people who are also thrill seekers. He also says that Sparkles is working with Yama. 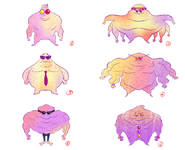 Dibs being possessed by the purple symbiote

Globby morphs into a creature

Globby as a T-rex

Globby now on BH6's side