Gloomy the Mechanic is a character from the Mickey Mouse comic strip. He was introduced in the 1932 storyline "The Mail Pilot" (written by Ted Osborne and drawn by Floyd Gottfredson). He is a friend of Mickey Mouse's who is an airplane mechanic that teaches him how not only how to fly and repair planes, but how to remain alive on his missions. Apparently he also works with (or maybe even for) Colonel Doberman. In the first adventure, Gloomy's character is a stark contrast to the role of Mickey. While Mickey is completely devoted to the adventure, Gloomy is foreboding and extremely pessimistic. The next time he appears is "Mickey and the Pirate Submarine" another Osborne-Gottfredson tale from 1935; in this adventure, Gloomy has a more active role: his skill is necessary to assist Mickey with a prototype air-sea ship called the "Submarplane" though he is captured with Mickey by Dr. Vulter and, while captives in his island, Mickey with the help of Gloomy defeats the evil Dr. Vulter. Similar to Goofy in his aspect, he doesn't play a very preeminent role in the adventures where he appears, but many Mouse-fans are devoted to him because he appeared in some of the best Mickey's adventures. 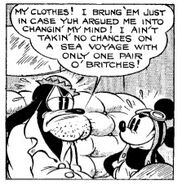 Add a photo to this gallery
Retrieved from "https://disney.fandom.com/wiki/Gloomy_the_Mechanic?oldid=3973669"
Community content is available under CC-BY-SA unless otherwise noted.