"Gloria's Café" is the second segment of the sixtieth episode of Big City Greens. Along with "Cousin Jilly", this serves as the second season finale.

Gloria opens a secret café in the former Big Coffee space without permission.

Gloria makes a grand pitch to the Greens to make a French themed café. Everyone is keen on the idea except Gramma Alice who does not think that she is fit to run a business. Despite this, she heads over the bank to get a loan, only to come out empty handed. Cricket and Tilly try to comfort her and discover that the old Big Coffee building next door was not locked properly. Upon seeing the empty interior, the three get the idea to run an illegal café in the space and disguise it by claiming that it is a French Revolution theme. Using the money they earn, Gloria can simply pay off the café afterwards. The three sneak some supplies, furnishing and dishes from the Greens' house and get people interested in coming via word of mouth.

The café seems to be a success with business running smoothly. However, Bill, Nancy and Alice discover that people are coming to the building and enter through the front, which Cricket forgot to lock. Gloria claims that she got the loan and that the restaurant is everything she wanted it to be, despite its more simplistic appearance. Bill congratulates her by making a sign reading "Gloria's Café" so that everyone can see it. Gloria has Cricket try to remove the sign, but Officer Keys spots it and becomes suspicious. He calls Don and Dawn realtors to come and investigate and Gloria has everyone dress up as ghosts which actually manages to scare them away, though Keys still finds something off.

As Bill, Alice and Nancy leave, they run into Keys, disguised as a hipster, and asks to direct them to the new café. Gloria becomes unnerved at them trying to help her that she finally breaks down and admits that she did not get the loan and that she was worried about being a disappointment to them. Keys reveals himself and arrests Gloria for squatting in the unused space, having seen through the ghost hoax because nobody said "boo". After bailing her out the same day because of her profits, the Greens drive her back home where Alice openly berates Gloria for her actions, but tops it off by admitting that she is impressed with her determination. She tells her that she will use her retirement money to help fund her business. Now officially owning the building, Gloria opens the "Gloria + Green Café", though a passerby thinks her name is Gloria Green which she reluctantly embraces. 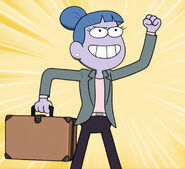