Mouseton
Glory-Bee was Goofy's girlfriend who first appeared in a Mickey Mouse daily strip on June 19, 1969, often as the headliner character. She was first created by Bill Walsh, and appeared in some "Mickey Mouse" dailies by Floyd Gottfredson, and others written by Del Connell (drawn by Manuel Gonzales). Her predecessor appeared perhaps as early as 1946, in the form of Minnie Mouse's Aunt Marissa (from a multi-aprt story by Floyd Gottfredson printed in the Mickey Mouse dailies June 17–29, 1946, and reprinted twice in WDC&S #95 and #575, and later seen in a cameo one-page gag lovestory by Bill Walsh and Manuel Gonzales which also featured Mickey Mouse and Montmorency Rodent [Apr. 21, 1946] that has been dubbed "Spring, Love, Monty").

Glory-Bee is a slender, pretty, blonde, and young dognose lady who, while quite good-natured and likable, tends to be somewhat of an "airhead" (a stereotype of the "dumb blonde"), which may explain why she was dropped from Goofy's storyline altogether (though a better possibility is that Goofy will always be the consummate bachelor). While it might be difficult to imagine she had a very strong crush on Goofy, he hardly seemed to notice. Occasionally, however, he did try to impress her, even to the point of trying to reveal his Super Goof identity to her, to no avail. At one point Glory-Bee and Clarabelle Cow were even vying for Goofy's attention, but both failed to achieve their objective (WDS #8). Perhaps it was during this time that Clarabelle dropped her strange attraction to Goofy, and returned to her former paramour and fiance, Horace Horsecollar. 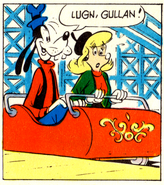 Retrieved from "https://disney.fandom.com/wiki/Glory-Bee?oldid=3834075"
Community content is available under CC-BY-SA unless otherwise noted.