Glut is first seen swimming around the shipwrecks when he spots Ariel and Flounder swimming about. He immediately attacks the latter and begins a chase. However, he ends up getting caught in an anchor and isn't seen again for the remainder of the film. 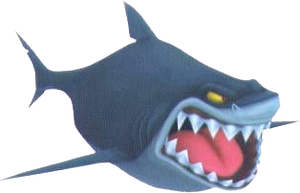 Glut is a minor character in Kingdom Hearts in Atlantica. He mainly appears around the Sunken Ship and attacks Sora and company while they are there. When the friends are searching for Ursula's lair, he attacks in an attempt to eat them. Upon being defeated, he flees. However, he still remains around the Sunken Ship after Ursula's defeat. Sora is able to battle him because if she goes into the area, he will attack.

The Disney Wiki has a collection of images and media related to Glut the Shark/Gallery.
Retrieved from "https://disney.fandom.com/wiki/Glut_the_Shark?oldid=1888566"
Community content is available under CC-BY-SA unless otherwise noted.