This article is about the Goldie & Bear character. For the The 7D character, see Goldilocks.

Goldie
The Culprit
The Girl
Girl

Robin Locks (father)
Marian Locks (mother)
Gramma May (Grandma)
Mary Mary (cousin)
Goldie Locks, more commonly known as Goldie, is the female protagonist of the 2015 Disney Junior animated series Goldie & Bear. She is an ten-year old girl who befriends Bear after she breaks his favorite chair. She always travels with Frog and plays with Bear every time is an adventure. Goldie is more emotional and impulsive, while Bear is more logical. This has given them a few communication errors in their friendship, such as when Goldie developed "Pinocchio-itis" when she had to fib to keep Bear's surprise gift a secret, thus making Bear mistakenly see her as dishonest. Goldie is a skilled inventor, and able to make complex machines with simple supplies even if they do not work all the time.

Goldie has apricot skin, blue eyes and long blonde hair that is styled into curly locks at the back. She generally wears a pink headband with a pink bow, a blue elbow-length dress with a pink ribbon on the front, a white collar and a pink belt, long white socks with pink trim and pink Mary Jane shoes.

Goldie Bear and Red
Add a photo to this gallery 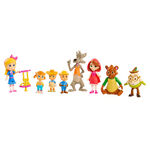 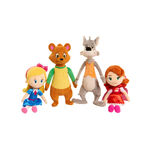 Retrieved from "https://disney.fandom.com/wiki/Goldie_(Goldie_%26_Bear)?oldid=4541916"
Community content is available under CC-BY-SA unless otherwise noted.