English
Gone Fishing is an animated short featuring the characters of Disney's 2016 animated film Moana. It premiered on February 21, 2017 with the release of the Digital copy of Moana.

On Motunui, Maui tries to catch a fish with his magical fishhook, only to be comically foiled by the ocean.

Moana plays with the ocean who presents a small fish to her, only for Maui to awaken from his nap and tell Moana, "Take it somewhere else, kid. You don't play with the ocean, you command it." He then attempts to fish for food, only for the ocean to repeatedly humiliate him in a variety of ways. During this time, Mini Maui continuously adds a mark for Moana over Maui's failed attempts. After Moana safely returns the fish to the ocean she quips, "Oh, and my name's not 'kid', it's Moana," with Mini Maui adding another mark. As Maui questions it, he is suddenly blasted away by a geyser.

Some of the animation seen in the short was intended to be used as a trailer for Moana. However, as direction changed, the idea was scrapped. It was later decided that the already-completed animation would be used and expanded upon to create a new, standalone short.[1] 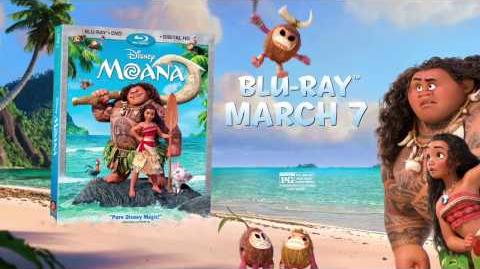 Moana smiling after Maui is blown away