Hang in There Baby by Bridgit Mendler

Good Luck Charlie is an American sitcom that originally aired on Disney Channel from April 4, 2010, to February 16, 2014. The series' creators, Phil Baker and Drew Vaupen, wanted to create a program that would appeal to entire families, not just children. It focuses on the Duncan family of Denver, Colorado as they adjust to the births of their fourth and fifth children, Charlotte "Charlie" (Mia Talerico) and Toby (Logan Moreau). In each episode, Teddy Duncan (Bridgit Mendler) adds to a video diary that contains advice for Charlie about their family and life as a teenager. Teddy tries to show Charlie what she might go through when she is older for future reference. Each video diary ends with Teddy (or another family member, even Charlie) saying the eponymous phrase, "Good Luck, Charlie".

Among other decisions, executives included adult-centric scenes and changed the series title from Oops to Love, Teddy and finally to Good Luck Charlie in order to ensure the series would appeal to all family members. Good Luck Charlie premiered on Disney Channel in the United States on April 4, 2010, in Canada on April 5, 2010, in the United Kingdom and Ireland on May 14, 2010, and in Australia and New Zealand on July 23, 2010. In March 2011, a feature-length Christmas Disney Channel Original Movie based on the series, entitled Good Luck Charlie, It's Christmas!, began production for a December 2011 premiere.

In June 2013, Disney Channel announced that the series was cancelled and ended production after its run after four seasons. The series finale aired on February 16, 2014, with a two-part episode.

The series focuses on the Duncan family, who are still adjusting to the birth of their fourth child, Charlotte "Charlie" Duncan (Mia Talerico). When parents Amy (Leigh-Allyn Baker), a nurse, and Bob (Eric Allan Kramer), an exterminator, return to work, they ask their three older children—PJ (Jason Dolley), Teddy (Bridgit Mendler), and Gabe (Bradley Steven Perry)--to help raise their little sister. At the same time, Teddy, PJ, and Gabe try to deal with school and general social challenges in their lives.

The events in each episode become material for a video diary Teddy is making for Charlie. Teddy hopes the videos will provide useful advice for Charlie after they have both grown up and Teddy has moved out. At the end of each video, she (and/or other cast members) says, "Good luck, Charlie" or may even say it indirectly such as "Wish them good luck, Charlie." During the movie, Amy reveals to Teddy that she is pregnant with her fifth child, but this story plot is not brought into the series until the third season, during which Amy gives birth to a baby boy, Toby.

The Good Luck Charlie pilot, entitled "Study Date", was shot in February 2010, at Sunset Bronson Studios (where Hannah Montana was taped) and the series was picked up later that year. The show's production occurs at Sunset Bronson Studios in Los Angeles even though the show is set in Denver, Colorado. Starting with the 2nd season, the series is taped at Los Angeles Center Studios, where Shake It Up is also taped. The show operates on a weekly schedule. Scripts for a new episode are issued on Monday before a read-through, Wednesdays are rehearsal and network run-through day, final scripts are issued on Thursday, and the episode is shot in front of a live studio audience on Friday night. According to Mendler, occasionally "episodes are too big to handle with a live audience [and are] taped without an audience, but mostly they're life."

Good Luck Charlie was created by Phil Baker and Drew Vaupen, who have been writing together since 1993 on shows ranging from Suddenly Susan to Sonny With a Chance. The pair aspired to create a program that would appeal to entire families rather than simply kids. Inspired by the success of reruns of shows, such as Full House and George Lopez with young audiences, Vaupen and Baker turned to family sitcoms. "We wanted to do a show about a family, to bring back a family sitcom and make it about a real family, not wizards, nobody's a pop star, nobody has a TV show," said Vaupen, referring to Wizards of Waverly Place, Hannah Montana, and Sonny with a Chance.

Good Luck Charlie's central family, the Duncans from Denver, Colorado, was carefully crafted for broad appeal. While the series is still told primarily through the viewpoint of the Duncan children, the children's parents, Amy and Bob, are less on the periphery and writers attempt to add scenes that adult viewers can relate to. For example, in one scene in the pilot episode, Amy confesses to Bob that she is overwhelmed with becoming a working new mother again. "She's not sure she can pull this off," says Bonnet. "And just playing that scene the way we did, a very real scene between husband and wife, kind of makes this show different." The writers also try to include jokes for adult viewers while remaining chaste enough for their young target audience. Unlike most previous Disney Channel series such as Sonny with a Chance, Hannah Montana, or Cory in the House, both parents are seen in the Duncan family. "It felt like the right time to have a show with two parents, to debunk the myth that Disney never has the mom in the picture," says Adam Bonnett, Senior Vice President of original programming for Disney Channel. "Because it is a myth."

Because a series about the rich and famous might alienate viewers in a troubled economy, the Duncans were made middle-class. According to Gary Marsh, Entertainment President of Disney Channel Worldwide, "We want[ed] to do is acknowledge the reality of the times in which we live, where two parents work, where kids are expected to help out around the house in meaningful ways. Real-life issues happen. Everyone isn't living The Life of Riley all the time."

Broadening Disney Channel's appeal was also a concern while choosing the character's names and the show's title. "You want a title that says, a) this is a sitcom and, b) this is something that will interest the main demographic but also we're trying to expand the Disney brand beyond just girls," Vaupen commented. The series' title was originally "Love, Teddy", the phrase Teddy had used to end her video diary entries during development. However, "Love, Teddy" immediately felt feminized and almost excludes boys," Vaupen said. "We also didn't want to have the word 'Baby' in the title because that would exclude certain people." The Duncan baby was originally named "Daisy" during development, but executives thought that "Charlie", which is usually a boy's name, would attract more boys. In addition, the family's surname changed from "Bremer" to "Holliday" to "Duncan" and the elder brother's name changed from "Casey" to "PJ", which could be a reference to the characters P.J. & Duncan from the British show, Byker Grove.

As Good Luck Charlie is low concept and character-driven, "The actors not only had to carry the show, they also had to have 'pitch-perfect' chemistry with each other to make the family dynamic believable." Bonnet says Disney Channel executives "just fell in love with" Bridgit Mendler, who stars as the series' protagonist, fifteen-year-old Teddy Duncan. "She has all the attributes of a Disney star," said Bonnet. Mendler first heard about Good Luck Charlie in late November 2008. After several rounds of auditions and cast reads, she secured the part in January 2009. Both Mendler and Jason Dolley, who plays Teddy's older brother PJ, have starred in previous Disney Channel series; Mendler had a recurring role on Wizards of Waverly Place while Dolley starred in Cory in the House and several Disney Channel television movies. Variety magazine's Brian Lowry says their careers "[reflect] the Disney Channel's knack for identifying young performers and rolling them from one project to the next, in a fashion reminiscent of the old studio system." Eric Allan Kramer, who plays Bob Duncan, and Leigh-Allyn Baker, who plays Amy Duncan, have also guest starred on other Disney Channel shows. Baker says Disney had been "courting [her] for a while to play a mom", but she had always felt too young. "I kind of feel like hey, you know what? When I'm done with this stint, I'll actually be the age everyone thinks I am to be able to play the part."

Like most series involving baby actors, producers of Good Luck Charlie had originally searched for twins to play Charlie Duncan, the title character and the Duncans' new baby. Hiring two babies would allow for longer work days without violating child labor laws as well as the ability to substitute one child for the other if one was unavailable. However, the show makers were unsuccessful in finding an appropriate set of twins and decided to cast Mia Talerico. Marsh says hiring Talerico, who was ten months old when she was cast, was their biggest risk while creating the show: "It's like flying without a net. She may have a bad day and we can't shoot and it'll cost us tens of thousands of dollars. But so far, so good. She's the most obedient actor I've ever worked with."

On January 27, 2014, Disney channel announced that it would introduce 2 lesbian moms in the 96 episode "Down a Tree". This stirred up controversy among groups "One Million Moms" and others boycotted Disney Channel. But some people, including Miley Cyrus among others, praised the episode saying that it needed to be included. This is the first time Disney has included gay people in a family-friendly Disney Channel show.

The series' premiere earned positive reviews. It also currently holds an 8.6 rating on TV.com and 6.9 rating from 2,957 users on IMDb.com. Robert Lloyd of The Los Angeles Times described it as a "professional sitcom from sitcom professionals" with efficient jokes and typical sitcom characters, and situations which are "willfully arranged". However, Lloyd praised the series for offering a "contextually novel picture of a teenage girl taking care of her baby sister with a persuasive nonchalance and practical ease that transcends the strenuous comedy that surrounds it". Neal Justin of the Star Tribune said the "slapstick-heavy, laugh-track fueled sitcom" had no redeeming qualities other than "keeping your 11-year-old sedated for a half hour". Rob Owen of the Pittsburgh Post-Gazette said Good Luck Charlie would appeal to kids, but not adults. "Parents have seen the same sort of show done before and better in ABC's 1980s-era TGIF lineup", wrote Owen. Contrarily, Brian Lowry of Variety magazine said Good Luck Charlie was "a surprisingly refreshing throwback to ABC's "TGIF"-style sitcoms". He commented that while the series did not "push sitcom boundaries", it was "sprightly" and "pleasantly handled".

The Duncan family heads out on a holiday trip from their home in Denver to visit Amy's parents, the Blankenhoopers, who live in Palm Springs. The family ends up finding themselves stranded between Denver and Palm Springs. Among their other misadventures, they try to hitch a ride from what seems to be a normal older couple who actually believe they are the victims of alien abduction. They resort to purchasing a clunker Yugo to get to Utah and have their luggage stolen in Las Vegas. Finally, they must survive a Christmas with Grandpa and Grandma Blankenhooper.

The film was written by Geoff Rodkey and directed by Arlene Sanford. It premiered December 2, 2011, on Disney Channel.

An Indian adaptation of the show, titled Best of Luck Nikki, premiered on Disney Channel India on April 3, 2011. Sheena Bajaj plays Dolly Singh, a character similar to that of Teddy R. Duncan. 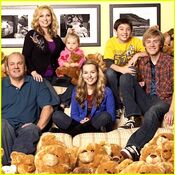