"How to Be Groovy, Cool and Fly"

Ma (by Goofy)
Grandma (by Max)

Her son
Goofy's Mother is the mother of Goofy and the paternal grandmother of Max Goof.

In most of her printed media appearances, she very much resembles her son, but older and more feminine, and with various motherly outfits depending on the artist.

For her appearance in the Mickey Mouse Works-styled House of Mouse cartoon "How to Be Groovy, Cool and Fly", she is depicted as an obese, anthropomorphic dog, and has a similar voice (provided by Kath Soucie) to that of her son, even sharing his iconic "Ah-hyuck!" laugh. She also has large feet with dark purple shoes and wears a light purple dress, a dark purple vest and a white apron.

In Floyd Gottfredson's Island in the Sky, Goofy briefly mentioned his parents when he waved goodbye to his loved ones, although both characters remained unseen.

Goofy's mother made her first printed appearance in the Disney's Wonderful World of Reading storybook The Princess Who Never Laughed.

In a 1970s-1980s Disney comic book series in which Goofy played the role of some of the most famous historical characters (such as Christopher Columbus and Leonardo Da Vinci), Goofy's character was often accompanied by his parents, who disapproved his scientific ideas. In contrast to her animated version, Goofy's mother appeared to be long and slender in these comics. Her most notable appearance was in Goofy Franklin, in which she had the role of Abiah Folger, Benjamin Franklin's mother.

The grandmother of Max Goof (most likely Goofy's mother) was mentioned by Goofy in the Goof Troop episode "Midnight Movie Madness". In this episode, when Max wanted to see the new Mutilator movie, Goofy wouldn't let him because he knew that scary movies didn't agree with Max. When Max denied Goofy's claim of Max having been scared by the witch in the movie Snow White and the Seven Dwarfs, Goofy retorted with, "Max, you can't watch Grandma stuff a chicken without getting faint."

In a later episode, "The Good, the Bad and the Goofy", Goofy implied that his mother had actually given birth to him at a public place like a zoo or a farm or some such: When Goofy nearly knocked over a tall-stacked display at a grocery store, Pete grumbled to Goofy, "You were born under a bad sign," to which Goofy replied, "Well, actually, I was born under a sign saying 'Please don't feed the elk.' Ah-hyuck! You see, my mother, who was pregnant at the time..." before being cut off by Pete.

Goofy's mother finally made her first animated appearance in the Mickey Mouse Works cartoon "How to Be Groovy, Cool and Fly", first shown in the House of Mouse episode "Big Bad Wolf Daddy". In this short, Goofy's mother was shown to be a very doting mother, and was implied to still pick out her son's clothes for him, indicating why Goofy has continued to wear the same style of clothing (his classic look of an orange shirt with a black vest, blue jeans, and a saggy green hat) for all these years.

Goofy mother is also mentioned in the episode "Pluto Saves the Day". When the villainous Pete disguises himself as Snow White in an attempt to trick Goofy into eating a Sleeping Apple, Goofy immediately recognizes that Pete isn't the real Snow White (whom Goofy points out is seated at a nearby booth) and declines Pete's apple offer, saying "No thanks. Ma said never to take food from a stranger."

Goofy's mother with baby Goofy in Pateta Em Esta É A Sua Vida ("This is Your Life, Goofy").

Goofy's mother in The Princess Who Never Laughed.

Goofy and his parents in Goofy Da Vinci. 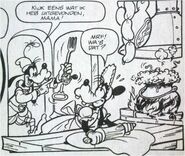 Goofy and his mother in Goofy Da Vinci. 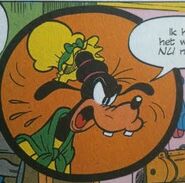 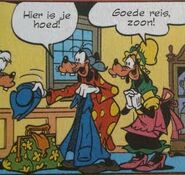 Retrieved from "https://disney.fandom.com/wiki/Goofy%27s_Mother?oldid=4073410"
Community content is available under CC-BY-SA unless otherwise noted.