October 12, 2010 (as Mulholland Madness)
Goofy's Sky School is a steel wild mouse roller coaster at the Paradise Gardens Park section of Disney California Adventure. It is based on Disney's cartoon, "Goofy's Glider".

Goofy's Sky School originally opened on February 8, 2001, as Mulholland Madness.[1] Its original name came from the famed Mulholland Drive in Los Angeles, California, named after the famed engineer William Mulholland.[1] Within the first month of its operation, three accidents occurred on the ride causing it to be shut for a short period of time for repairs.[2] The ride vehicles were themed to the many cars one can find on the Southern California freeway systems, (such as Highway Patrol cars or Classic Surfer "Woodies"). At the end of the ride, a sign on the wall above read "Rental Car Return".[3][4]

On October 12, 2010, Mulholland Madness closed for refurbishment and retheming as part of Disney California Adventure's major refurbishment.[5] On July 1, 2011, the attraction reopened as Goofy's Sky School.[6] Its reopening is the latest in a series of moves to attempt to introduce classic Disney characters into Paradise Pier.[7]

Based upon Disney's animated cartoon "Goofy's Glider", Goofy has opened an unlicensed flight school teaching students to fly the Goofy way. Bulletin boards in the queue feature citations from Paradise Pier authorities for damages caused during his flights, letters related to an inept graduate causing trouble, and a message from Country Bear Big Al about an order of plane fuel made out of moonshine.

Riders board a plane and navigate a crash course of flying which features sharp turns, steep drops and sudden stops. Goofy is pictured on billboards throughout the ride teaching guests the step-by-step process of flying a plane in an effort to emulate the How-To cartoon formula.[6][5] 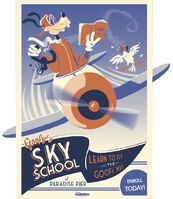 Poster of the attraction

Learn to Fly the Goofy Way! 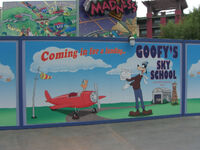 Construction Wall during the ride's rennovation 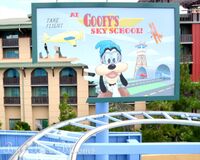 Billboard seen at the top of the ride 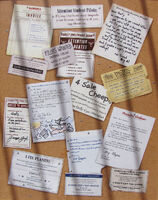 Official Logo of the ride 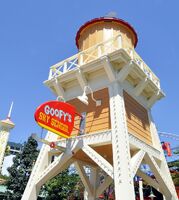