Disney Wiki
Register
Don't have an account?
Sign In
Advertisement
in: Article of the week, Characters, Winnie the Pooh characters,
and 19 more
English

Mr. Busy from Lady and the Tramp

His digging upsetting the others, Rabbit disturbing Pooh Bear's appetite on his swing shift, The Crows using his holes to steal Rabbit's vegetables, being woken up from winter hibernation, the dark, falling down his own holes

Gopher is the only character in the original shorts that is an original character and not based on someone from the A.A. Milne books, a fact he notes in his first appearance when he says "I'm not in the book, you know!" Instead, he was initially developed by Disney as a replacement for Piglet. Apparently, the proposed character of Gopher was thought to have a more "folksy, all-American, grass-roots image" than Piglet. While American audiences loved the character, British audiences were less than pleased. Like most Pooh Bear characters, he's named after his own species.

Gopher is also known for his unique voice characterization. He tends to whistle his consonants, particularly his S's. This is lampshaded in his debut; when Pooh mimics Gopher while asking for honey, Gopher tells Pooh he should do something about his speech impediment.

Gopher has a very plain personality; he is rarely seen outside his burrow, so not much is known about him socially. He is generally a hard-worker, especially in his mine shafts (tunnels) and spends most of his time tediously working on them. Despite his low social life, Gopher is not a silent character, while talking to the other animals he has a habit of whistling out his sibilant consonants.

Gopher first appears in the featurette Winnie the Pooh and the Honey Tree. When Owl discovers that Pooh has become stuck in Rabbit's door, he asks Gopher, who is a self-proclaimed expert in excavation, to assist in removing Pooh. Gopher introduces himself, explaining that he "is not in the book." Gopher notes that the project is dangerous, and could take a few days. He offers to use dynamite but is refused, and so Gopher leaves, but falls down his own hole.

Later on that night, Gopher reappears, intent on eating his midnight snack. Gopher notes that he goes home for lunch, and produces his lunch box. He reveals that the contents include summer squash, salmon salad, succotash, spiced custard, and finally, honey. Pooh asks Gopher for a taste of the honey, to which Gopher agrees. But before Pooh can help himself, Rabbit interferes and confiscates the honey and places a sign on the ground that says, "Don't feed the bear." Gopher goes angry, and leaves in a huff, resulting in him falling down his own hole again.

When Pooh finally gets thin enough to be pulled out, Gopher joins all the other characters on helping to pull Pooh out by taking one of Roo's arms (who was in front of him), but he and Roo were pulling too hard, and cause Eeyore's tail (which Roo was pulling on) to fall off, resulting in Gopher falling down his own hole for the third time. He later emerges again, noting that Pooh, who was finally shot out from Rabbit's role, is about to fly out of the book, and urges the book to turn the page, which it does, resulting in Pooh landing in the Honey Tree's hole.

In Winnie the Pooh and the Blustery Day, Gopher makes a minor appearance at the beginning. He notes to Pooh that it is "Winds-Day", inspiring Pooh to go and wish all his friends a Happy Winds-Day. He appears again at the end, when the main characters are cheering for Pooh and Piglet by bouncing them up and down with a sheet, above Gopher's hole. Gopher pops out, wondering what the commotion was about, when Pooh and Piglet accidentally land on him, sending him down his hole (again).

In The New Adventures of Winnie the Pooh, Gopher's character has a very prominent role, appearing in over half the episodes. He is shown to be a bit of a workaholic and is obsessed with dynamite. His various conflicts often Rabbit, as Gopher's various plans often take place underneath Rabbit's garden.

In the episode "Fish Out of Water", Gopher is forced to move in with Rabbit temporarily after a fish migration takes over his tunnels.

In the episode "Lights Out", Rabbit secretly borrows Gopher's helmet. Gopher becomes scared of the dark, and whenever someone says 'Dark', he freaks out, but he soon conquers his fear and helps Piglet find the others in the tunnel.

One of Gopher's most notable episodes was "Pooh Skies", in which Pooh has "broken" the sky. Pooh and the others move in with Gopher to protect themselves from the fallen sky. Gopher, unhappy with the idea, helps Pooh to go up to the sky and successfully "fix" it.

The episode "To Dream the Impossible Scheme" introduced Gopher's Grandpappy, who, unlike Gopher, prefers to dream about things rather than do them.

In the episode "Sham Pooh", Pooh lost his appetite and Owl thinks that Pooh is missing. So, Gopher switched places with Owl after Owl switches places with Pooh. Although, when he tries to fly, he ended up falling down.

In "Winnie the Pooh and Christmas Too", Gopher helps Rabbit, Tigger, and Eeyore in choosing a Christmas Tree. He does so reluctantly, as he apparently hibernates during the winter (and so Tigger has to wake him up using a loud alarm clock).

Gopher, with a similar design to his portrayal in the New Adventures of Winnie the Pooh, makes a cameo appearance in the episode "Terminal Pete". He plays a prominent role as a destructive pest that Pete's daughter, Pistol adopts as a pet. In this appearance, Gopher does not speak and only makes animal noises as an actual gopher does. The cameo appearance was subtly acknowledged by the writers as the character is referred to as "Gopher" throughout the episode.

He briefly cameos again in the episode "Bringin' on the Rain".

Gopher makes minor appearances in the 2002 Christmas special-feature A Very Merry Pooh Year. He only has three lines. To date, this is Gopher's last appearance in the Winnie the Pooh films and specials as he only appears in flashbacks in the was-coming movies (Pooh's Heffalump Halloween Movie).

Gopher has sometimes made cameo appearances as one of the guests at the club. He helps Mickey by stopping Goofy ruining Max's date in the episode "Max's Embarrassing Date". He digs underneath the club, so Goofy falls in it. Mickey jokingly says that there are probably termites in the club to which Gopher jokingly replies: "Well, I'm an awfully big termite."

Gopher makes a minor appearance, only appearing in the "Boo to You" sequence. 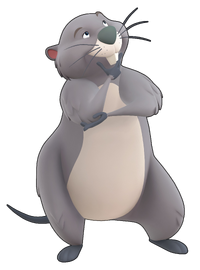 Gopher has a minor role in the 100 Acre Wood's storyline. He appears three times, the first at Piglet's House warning Pooh of "Windsday" (as he did in Winnie the Pooh and the Blustery Day). His second appearance is at the Spooky Cave helping Sora search for Pooh. His final appearance is at Starry Hill saying goodbye to Sora.

He is also part of the Hunny Slider mini-game, serving as a buffer between Pooh and various obstacles.

Gopher returned in Kingdom Hearts III, where he helps Sora get Pooh some honey.

Gopher has a spell card known as "Gopher's Demolition Dynamite" in the attraction Sorcerers of the Magic Kingdom.

In Pooh's Hunny Hunt at Tokyo Disneyland, Gopher is seen in the storybook pages along with Pooh and the others.

In Winnie the Pooh and Friends, too!, Gopher appears popping out of his hole to warn Pooh of the blustery day ahead of him and his friends right before they go on an adventure.

Gopher appears as an audio-animatronic in the dark attraction. He can be seen during the Blustery Day section telling Pooh that it's Windsday. In the Magic Kingdom version, Gopher can be seen in Rabbit's garden popping out of his holes.

The Disney Wiki has a collection of images and media related to Gopher (Winnie the Pooh).