Pep rallies
The Goth Girls are a couple of minor characters from Disney's 1995 film A Goofy Movie.

The Goth Girls make only brief appearances during the "After Today" song sequence, which is sung while everyone is on their way to school for the last day before summer vacation.

As a school bus passes by Max Goof on his way to school, the Goth Girls can be seen through the window of the bus sitting in the seat right behind the bus driver and right in front of Bobby Zimuruski, singing the words "After today..." with the rest of the students.

Inside the bus, after many cheerleaders wave their pompoms in unison while singing "...I'm gonna be cruisin'!", the two Goth Girls chime in with their distaste for the school's pep assemblies, singing "No more pep rallies to cut!" followed immediately by a "Bleah!" as they point their fingers at their open mouths in a gagging gesture.

When the bus pulls up to the school, the students aboard (including Bobby) disembark from the bus singing "After today our brains'll be snoozin'!"; the redhaired Goth Girl happily sings along as she runs off with the others.

They are not seen again for the rest of the movie. 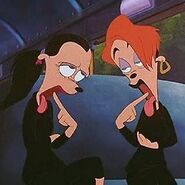