Gram-Gram Peg-Leg is Pete's grandmother, who always wanted Pete to go into the entertainment business, rather than become a crook. According to her grandson, she used to sing "Boom-Da-Boom" to him when he was little.

She made her animated debut in the House of Mouse episode "Pete's One-Man Show", where she was voiced by Jim Cummings.

At the end of the episode Pete brings her into the House of Mouse to be his audience during his one-man show, after the rest of the club's guests have left.

In the Mickey Mouse Clubhouse episode "Chef Goofy on the Go", Pete's grandmother Grammie appears. Pete asks Mickey and his friends to help him save his Grammie who is hanging from a cliff. 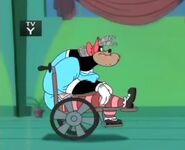 Add a photo to this gallery
Retrieved from "https://disney.fandom.com/wiki/Gram-Gram_Peg-Leg?oldid=3737074"
Community content is available under CC-BY-SA unless otherwise noted.