Her family
Hugs and kisses
Fighting

"You kids are smarter then you look"

Alice Delores "Gramma" Green is a character from the Disney Channel animated series Big City Greens. She is the mother of Bill Green and the grandmother of Cricket and Tilly Green, as well as the matriarch of the Green family.

Gramma Alice is the cranky old matriarch of the Green family. Though she can be mean at times, she still deeply cares for her family and puts them before anything else.

In "Gramma's License", it is revealed that she used to be a racer named "Hot Rod Alice". It also shows that she's scared of getting old and becoming useless, and that if she fails her driver's test, "it'll prove just that." Fortunately, she passes the test and renews her license.

Gramma Alice is elderly and somewhat shorter than Bill. She wears a pink blouse and slippers, glasses, and carries a cane. Her right leg has been broken off for years, and she wears a wooden leg in place of where it used to be.

In her youth, she had curly brown hair. As a child, she was no bigger than Cricket or Tilly and as an adult, she was noticeably taller than she is in her current elderly state. 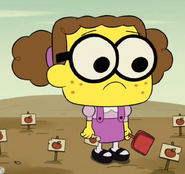 Alice as a child

Alice as a "young" adult

Retrieved from "https://disney.fandom.com/wiki/Gramma_Alice?oldid=3709217"
Community content is available under CC-BY-SA unless otherwise noted.