El Rio del Tiempo
Gran Fiesta Tour Starring The Three Caballeros is a boat ride attraction in Epcot at the Walt Disney World Resort in Florida. It opened on April 6, 2007, replacing El Rio del Tiempo, and is housed within the pyramid-shaped structure at the Mexico Pavilion. The attraction was announced on February 23, 2007 although construction began on the ride on January 2, 2007.

The attraction begins in a queue area decorated with posters indicating that The Three Caballeros are to perform a concert tonight.

After boarding the boats, guests float around the Mayan pyramid in the back of the pavilion's main room. Soon, guests enter a tunnel on the side of the pyramid, where Panchito Pistoles and José Carioca of The Three Caballeros introduce themselves, only to find out that Donald Duck, the third member of the group, has run off, prompting Panchito and José to set off on a frantic search for their missing friend.

The next few scenes show Donald touring Mexico with José and Panchito flying on a magic serape, looking for him.

Donald takes in the sites throughout the country. He visits Aztec Pyramids and goes boating, parasailing, cliff-diving and scuba-diving, among other activities.

One scene has characters similar to It's a Small World with dancing animatronic dolls and a Donald Duck piñata. Once past this area, guests enter a cave, which features different scenes of live-action footage with the Caballeros.

After leaving the cave, there are three panels featuring a Mariachi band in the first, some Mexican girls and Donald in the second with Panchito and José pulling away Donald from the girls in the third.

From the mariachi party, guests float into Mexico City, where fireworks are going off overhead and The Three Caballeros are finally performing their concert.

As the journey ends, guests pass a mural map inspired by the one that appears in the film before they arrive at the unload dock.

Departing from the docks and going past a Mayan pyramid, the attraction begins with José Carioca and Panchito Pistoles introducing themselves with music and realizing that Donald has gone astray. Not wanting to be late for their concert stop in Mexico City, they set off on the flying sarape to look for him. While they search for him, Donald Duck takes in the sites throughout the country. He visits Aztec Pyramids, goes boating, parasailing, cliff diving and scuba diving among other activities. Eventually, Panchito and José catch up to Donald at a Mariachi performance and have to pull him away from numerous girls in order to finally reach their concert, with the attraction ending with a performance of the Three Caballeros song. Guests go past a mural map inspired by the one that appears in the film before they unload at the dock the attraction began at.

A Three Caballeros-inspired update to the Mexico Pavilion's boat ride was a long-persisting rumor since the early 2000s. Eventually, in 2007, El Rio del Tiempo closed for the long-rumored change. New footage was shot and the new animation for the attraction was directed by Eric Goldberg.

On December 4, 2015, the attraction received an update, replacing the ending scene's animation with the animatronics of the Caballeros from the Mickey Mouse Revue. This was part of earlier plans for the attraction, but refurbishing and repurposing the figures was delayed until then for budgetary reasons.

Clean version of the logo art 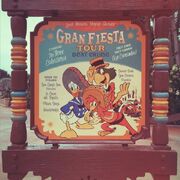