Disney Wiki
Register
Don't have an account?
Sign In
Advertisement
in: Characters, Deleted characters, The Haunted Mansion characters,
and 8 more

The Museum of the Weird

The Grandfather Coffin Clock is an object and character created for the unbuilt Museum of the Weird attraction which has since made legacy appearances.

The Grandfather Coffin Clock was created by Rolly Crump to be featured in the Museum of the Weird extension of Disneyland's Haunted Mansion in New Orleans Square. It would have been a grandfather clock made with a coffin and bones with a blade pendulum and a devil (or skull) face on its face. It is believed that the face would have moved and interacted with guests as this was a recurring element in the Museum of the Weird's plans. Ultimately, the attraction went unbuilt (believed to be in part from Walt Disney's demise) and the grandfather clock would go unused.

Above the Silhouette Studio of Main Street, is a window tributing Rolly Crump reading, "Fargo's Palm Parlour; Predictions that will haunt you; Bazaar, whimsical & Weird. Designs to die for Roland F. Crump assistant to the Palm Reader". On the window, are designs of architecture from It's a Small World, the tiki god Maui from the Enchanted Tiki Room, and the Coffin Clock. The doors to this parlour served some importance during the Ghost Post interactive game where guests were sent by Madame Leota, the GRD, and Esmeralda to free ghosts from the parlour.

The coffin-clock is the central McGuffin in Disney Kingdoms: Seekers of the Weird in addition to being an antagonist. It is revealed to be the prison for The Reaper King, the personification of the bubonic plague, which was imprisoned in the Museum of the Wyrd not long after enacting the Black Death. The clock is sought after by the Mistress of Evil and her Shadow Society as they are worshipers of the Reaper King, who believe they will be rewarded with immortality if they free the spirit. They go about kidnapping the parents of Maxwell and Melody Keep to blackmail them and Roland Keep into obtaining the clock for the Society. After being freed, the Reaper King, however, would punish the Shadow Society for taking so long by killing them before being imprisoned by the Keepers again. 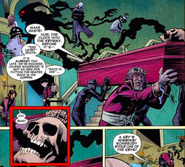