Knitting, working on her farm, her family, cooking

Her farmhand being lazy, Jaq and Gus causing trouble

Dobin the Horse, Gnawton the Goat, Porgy the Pig, Caesar the Rooster, Betsy the Cow, Johnny the Bull, various other farm animals
Elvira Coot, nicknamed Grandma Duck (first name given as Elviry[1], Elvira[2][3] or Abigail[4][5]) is the grandmother of Fethry Duck and Gladstone Gander and the paternal grandmother of Donald Duck, as well as the Duck family matriarch. In most stories, she is simply referred to as Grandma.

Grandma is Grandpa Duck's wife and the mother of Quackmore Duck (Donald Duck's father), Daphne Duck (Gladstone Gander's mother), and Eider Duck (Fethry Duck's father). According to The Invader of Fort Duckburg, Grandma and her husband used to be nicknamed "Ma and Pa Duck". Walt Disney confirmed that Ludwig Von Drake was the brother of Donald's father, which would make him Grandma Duck's son, as well.[6] However, the Disneyland episode "The Donald Duck Story" specified that the Drakes were the paternal side of Donald's family and the Ducks were the maternal side (with Donald taking his mother's name), and therefore confirmed that Grandma and Ludwig are unrelated to each other, and would make Grandma Donald's maternal grandmother. According to Mickey Mouse Works and House of Mouse, Ludwig's mother is an off-screen Austrian lady, voiced by April Winchell.

According to her debut appearances in Bob Karp and Al Taliaferro's Donald Duck newspaper comic strips, Grandma was an American pioneer and came west in a covered wagon.[7][8] The strips also portrayed her as having lived through the American Civil War, when some of the money she has been "saving for a rainy day for quite a spell" turns out to be confederate money.[9] A later strip also shows that her husband, Grandpa Duck, was a soldier who fought in the Civil War.[10]

Grandma runs the Duck Family Farm, which is the center of the family's annual holiday gatherings, with said gatherings usually arranged by her. These are always merry, warm, and interesting occasions. Grandma Duck is a great cook and is often praised for her sublime cooking skills.

She is depicted as driving a Detroit Electric automobile. She is extremely old-fashioned, being against many current trends. However, she did persuade herself to buy a television set after seeing other farmers use it. So far, however, she has only been shown watching farm reports, news, and weather updates. Another example of her old-fashioned ways was when she tried to usher out a vacuum cleaner salesman by saying she has done just fine cleaning with her broom. In this case, the salesman was actually a gunman who then holds Grandma hostage as well as Daisy Duck (who was visiting), and demands their purses and other possessions.

Grandma's first name "Elviry" (a rural pronunciation of "Elvira") was mentioned in an untitled 1950 comic (Walt Disney's Comics and Stories #121) and later used by Don Rosa in his Duck Family Tree and The Invader of Fort Duckburg. However, in an untitled 1953 comic by Frank McSavage and Carl Fallberg (published in Walt Disney's Christmas Parade (Dell) #5), as well as the 1955 comic story Ridin' the Rails (Walt Disney's Comics and Stories #173-175) Grandma's first name was said to be "Abigail".

According to numerous European stories (including Marco Rota's From Egg to Duck, created in honor of Donald's 50th anniversary in 1984), Grandma is Scrooge McDuck's older sister. Occasionally they have also been portrayed as being cousins, a now rarely enforced tradition. According to the Donald Duck family tree Carl Barks sketched out for personal use in the 1950s, Scrooge is the brother of Elvira's daughter-in-law[11]. For this relationship, there is no word in the English language.

Grandma Duck's parents made a brief appearance in Grandma's flashback in Walt Disney's Comics and Stories #161 (1954). In Don Rosa's 1993 Duck Family Tree, her parents' names are given as Clinton Coot and Gertrude Gadwall, while her grandfather was said to be Cornelius Coot, the founder of Duckburg (introduced by Carl Barks in Statuesque Spendthrifts, first published in 1952's Walt Disney's comics and Stories #138). She was also given a brother called Casey Coot on this tree.

Grandma Duck was introduced to the Disney comics by Al Taliaferro in the Donald Duck newspaper comic strips. She made her very first appearance in 1940, on a portrait in Donald's house, behind which Donald tries to hide his money from burglars.

In 1943, Grandma Duck visits Donald and the nephews in person in a series of newspaper strips, and from then on became an occasionally recurring character in the strips. Taliaferro found inspiration for her in his own mother-in-law, Donnie M. Wheaton. Aside from newspaper gags, Grandma also got an increasingly more prominent role in other Donald Duck comics, where she could be seen living on her farm with Donald's country cousin Gus Goose as her farmhand. However, Gus is very lazy and does not work much. In some stories, especially older ones, Jaq and Gus, the two mice from Cinderella, live at Grandma Duck's farm.

Grandma made her animated debut in the 1960 Wonderful World of Color episode "This is Your Life, Donald Duck", where she was voiced by June Foray. The episode depicted her great difficulty in raising Donald, a strong-willed and ill-tempered duckling from the moment he was hatched.

Grandma also made a non-speaking cameo as a guest at Fezziwig's party in Mickey's Christmas Carol (1983), and a speaking cameo (voiced by Russi Taylor) in Sport Goofy in Soccermania (1987), reading the newspaper in her rocking chair, and looks notably more aged than her comic self. She has one line, praising Scrooge McDuck for donating an expensive trophy to a forthcoming soccer tournament. In the DuckTales episode "Horse Scents", Grandma can be seen very briefly among the spectators of the horse race, leaning on a cane.

Grandma Duck had a minor appearance in Donald Duck no Mahō no Bōshi, in which her pet bird, Pippi, has escaped and was consequently captured by Pete. She offers to pay Donald to sneak into Pete's house to retrieve the bird, as one of the optional jobs Donald may take during the first portion of the game, and explains the controls for deactivating noisy objects so that Donald does not attract the attention of Pete's watchdog, Butch.

Grandma Duck's farm was the inspiration for a children's petting farm as part of Mickey's Starland at the Magic Kingdom in Walt Disney World, where Minnie Moo, a cow with a Mickey Mouse-shaped marking, was featured. Grandma also joined Donald at Donald's 50th Birthday Parade in 1984, one of Grandma's rare Disney Park appearances. Tokyo Disneyland's Toontown has a baby care center themed as a daycare operated by Grandma.

Grandma Duck as she appeared at Disneyland. 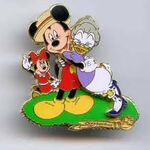 Grandma in her swimsuit.

Duck Family circa 1902, sans Quackmore (and alongside Scrooge).