Grandma Goofy made her first appearance in a 1944 Mickey Mouse Sunday page by Hubie Karp and Bill Wright. Her first speaking appearance was in 1955, in the daily Mickey Mouse newspaper strips which formed the 120-page counting comic Dr. X.

Goofy's grandma later made an appearance in Super Goof: The Granny Hang-Up.[1] Goofy's living room is adorned with pictures of his beloved grandmother. After her grandson calls her for help, she single-handedly defeats a bank robber using her umbrella.

Grandma Goofy had a prominent role in the Mickey Mouse comic Topolino e l'insolita indagine ("Mickey and the Unusual Investigation"), in which Mickey doesn't seem too pleased with her presence.

When Goofy was young, he and Clarabelle once borrowed some of his Grandma's clothing to disguise themselves so that they could spy on their opponent's soccer team without being noticed, as mentioned in Paperino e Topolino in: la finale, finalmente ("Donald and Mickey: The Final, Finally"). In this story, Goofy also mentions that his grandma is a big fan of F.C. Duckburg, Duckburg's local soccer team.

Grandma Goofy made her first animated appearance (eventually being revealed to be Goofy in disguise) in "Goofy's Grandma", the twenty-fourth episode of Mickey Mouse, where she was voiced by Bill Farmer.

In "The Big Good Wolf", Grandma Goofy made a cameo on portrait in Goofy's house.

Grandma Goofy as she appeared in "Goofy's Grandma" 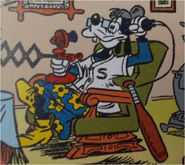 Goofy, disguised as his grandmother.