“Now let me tell you how things are supposed to work: The sun grows the food, the ants pick the food, the grasshoppers eat the food...”
―Hopper to Princess Atta

The Grasshoppers are the insects led by Hopper, and is the primary antagonistic group of Disney/Pixar's 1998 film A Bug's Life. They are notorious in bullying the ants into collecting food for them. When they are not terrorizing the insects of Ant Island, the grasshoppers are seen in Hopper's Hideout.

An unusual duo of grasshoppers that are part of Hopper's army, Axle and Loco have a different size comparison. Loco is taller than his companion Axle who is shorter than tough with one of his antennae cut in half. During Hopper's plan to take over Ant Island, he buries the duo, along with a third unnamed grasshopper, in a large pile of grain to make a point on how the ants will soon realize their better advantage over the grasshopper gang if left unchecked. Despite this, the aforementioned duo can be seen during the plan to scare off the grasshoppers with help from the circus troupe, implying that they weren't killed by the incident.

After Flik causes all the food for the grasshoppers to fall into the water, a gang of grasshoppers begins to descend downward toward the ant colony, attacking them for losing their food. Hopper then warns the ants that if the last leaf falls and the ants do not collect enough food, the grasshoppers plan to take over Ant Island as Hopper's evil plan.

Later in Hopper's hideout after spending a vacation there, Hopper thinks of traveling back to Ant Island to get food before winter. However, after, the last leaf falls during Flik's banishment during the climax of the film, the grasshoppers take complete control of Ant Island after Flik along with the Circus Bugs was wrongfully banished by Atta and her mother until the ant colony finally fights back and take their island back in which they retreat (without Hopper) defeated. After this, it is unknown what became of the grasshoppers or where they escaped to; however, Hopper is devoured by the bird's chicks after Flik and Princess Atta lure him to her nest, and Molt moves to Bug City and joins P.T. Flea's circus act. 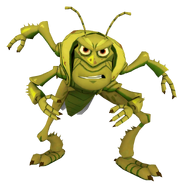