Fa Family Home
The Great Stone Dragon is a stone dragon located outside the Fa family household. It makes a minor appearance in Mulan.

After Fa Mulan runs away from home to serve in her elderly father Fa Zhou's place in a war against the deadly Hun Army, the spirits of the ancestors choose to send the Great Stone Dragon to simply bring her back home safely. For the task of awakening him, they send Mushu, who is offended when he is not asked to find her himself (in the past, his actions in protecting the Fa family led to disaster). After several unsuccessful attempts at waking the Dragon, he accidentally destroys the dragon statue after slamming the gong on its right ear until it breaks off. Fearing the ancestors' wrath, Mushu uses the statue's mostly intact head to imitate the being and cover up his mistake. The ruse works, and the head ancestor tells the "dragon" to go and fetch Mulan. 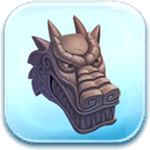