José Carioca in green cape, a red cap, springs under his feet, wearing black glasses, white gloves and a red sweater with a black bat

He is a clumsy superhero, created by the Brazilian writer Ivan Saidenberg. Green Bat appears for the first time in the story O Morcego Verde, published in the Brazilian magazine Zé Carioca # 1217 (March 7, 1975).

José comes to the idea of ​​a superhero when he reads comics about Morcego Vermelho (Red Bat), the Brazilian popular alter ego of Fethry Duck. José dons a green cape, a red cap, springs under his feet, wearing black glasses, white gloves and a red sweater with a black bat on it, and tries to fight crime. Though the hero is trying to keep his identity secret, everyone in his neighborhood know who he really is. His faithful helper Manuel, carries a fan everywhere behind him, so José can wave his cape in an impressive way.

In late 1994, the story The Knight Debts, in which the character is revised appears. The story, written by Marcelo Cassaro, is partly based on Batman: The Dark Knight Returns, and includes a new origin for José's alter ego. Since 1994 Green Bat wears a costume based on that of Batman, and the storylines are influenced by the adventures of the Dark Knight. The last of the nearly 100 stories in which Green Bat plays a part was published in 2001. None of the stories of this nature has been published in the Netherlands. 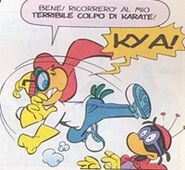 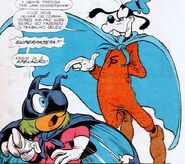 Add a photo to this gallery
Retrieved from "https://disney.fandom.com/wiki/Green_Bat?oldid=3982799"
Community content is available under CC-BY-SA unless otherwise noted.