Not to be confused with Gregg Berger

1982-present
Greg Berg is an American actor and voice actor, who is best known for his work in several cartoons, video games, and various films. He is best known for voicing Baby Fozzie and Baby Scooter in the original Muppet Babies series, as well as Donatello and Bebop in the original 1987 series of Teenage Mutant Ninja Turtles, the latter role being an alternate voice in six 1989 episodes.

He has done various work for Disney, such as voicing the Minesweeper Soldier and the local announcer in Toy Story, Fungus in several Monsters, Inc. video games, the Stage Manager voice in The Muppets, and some additional voices in The Cat Returns, Chicken Little, and The Wild. 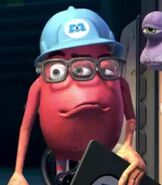 Fungus
(video games)
Add a photo to this gallery
Retrieved from "https://disney.fandom.com/wiki/Greg_Berg?oldid=4327040"
Community content is available under CC-BY-SA unless otherwise noted.