Gregory Andrew "Greg" Germann is an American actor, television personality, voice artist, and comedian. He played the roles of Richard Fish in Ally McBeal and Eric "Rico" Moyer in Ned and Stacey, and has appeared in numerous films including: Quarantine, Spectacular! Get Hard, So I Married An Axe Murderer, The Little Rascals Save The Day, Down and Derby, Here Comes The Boom, The Sandlot 2, Talladega Nights: The Ballad of Ricky Bobby, Child's Play 2, Friends With Money, and Group Sex.

For Disney, he voiced the Agent in Bolt and portrayed Hades in Once Upon a Time. He also plays Tom Koracik in Grey's Anatomy. 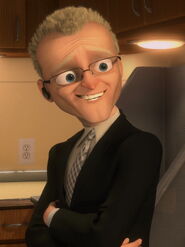 Hades
(Once Upon a Time)
Add a photo to this gallery 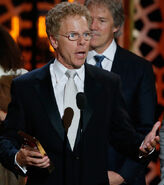 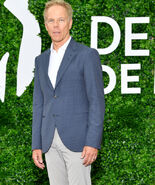 Greg Germann attending the 59th annual Monte Carlo TV Fest in June 2019.
Add a photo to this gallery
Retrieved from "https://disney.fandom.com/wiki/Greg_Germann?oldid=3867917"
Community content is available under CC-BY-SA unless otherwise noted.