For Disney, Sulkin subsequently became known for his roles as as JJ in the Disney Channel comedy series As the Bell Rings and Wizards of Waverly Place as Mason Greyback. He also played as William Wagner in the 2010 DCOM Avalon High He even had a guest role as Rick in Freeform's sitcom Young & Hungry and played Chase Stein in the TV series Runaways. 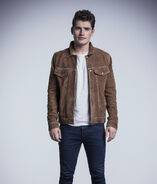 Chase Stein
(Runaways)
Add a photo to this gallery

Gregg Sulkin arrives at the 2019 FOX Teen Choice Awards.
Add a photo to this gallery

Retrieved from "https://disney.fandom.com/wiki/Gregg_Sulkin?oldid=3747099"
Community content is available under CC-BY-SA unless otherwise noted.