Leader of the Gremlins

The Forests of England,

Gremlin Markus (nephew)
Gremlin Gus is a character created in the 1940s for an unfinished animated film based on Roald Dahl's story The Gremlins. He is a tiny, green-skinned gremlin that serves as the leader of a gremlin community dwelling in the forests of England. Though the film was never made, there was a Disney illustrated version of Dahl's story and he and his fellow Gremlins appeared on various World War II insignias with other Disney characters. In recent years, Gus took on a prominent role in the 2009 video game Epic Mickey aciting as Mickey Mouse’s sidekick.

Forced out of their forest home by the construction of an airplane factory, Gus and his fellow Gremlins set out to sabotage the British Royal Air Force's planes in revenge. But after meeting a pilot also named Gus and explaining the plight of his people, they strike a deal: Gremlin Gus will reform the Gremlins and now assist in the upkeep of planes in exchange for free food (in the form of postage stamps) and an untouched forest being set aside for the Gremlins to live in. When the pilot Gus is shot down and injured, the Gremlins help in his recovery and help him pass a medical exam later on in his recovery, allowing him to take to the skies again.

Because of the movie having never been finished, Gus lived in the Cartoon Wasteland with the other Gremlins for years. He and his fellow Gremlins were some of the few still fighting the Blot after the Blot Wars mostly ended. However, Gus and a few others were captured by the Mad Doctor until Mickey Mouse arrived in the Wasteland and freed him and his comrades. Gus decided to follow Mickey and help guide him through this new world, taking on a Jiminy Cricket role.

“Gus, the chief Gremlin of Wasteland, helps Mickey in his epic quest by teaching him the ways and history of his world. Do you have someone like this in your life?”
―Disney Epic Mickey Video Game Facebook page description.

Gremlin Gus makes a reappearance of the sequel. In it, he and Ortensia call upon the help of Mickey because the Wasteland Begins to be affected by "natural" disasters and they want Mickey to find out if the Mad Doctor claims that he has reformed are true.

Concept art of Gus in his proposed film 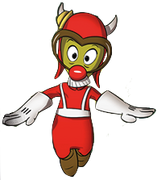 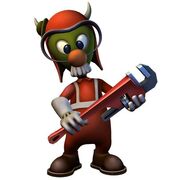 In Return of the Gremlins