Keeper of the Gag Factory

Being ignored, his intelligence being "wasted", being foiled

Gremlin Prescott is a Gremlin who used to be a good helper, but later became a villain gremlin. He was created in the 1940s for an unfinished animated film based on Roald Dahl's story The Gremlins. Though the film was never made, there was a Disney illustrated version of Dahl's story and he and his fellow Gremlins appeared on various World War II insignias with other Disney characters. In recent years, Prescott took on a prominent role in the Epic Mickey video games.

In Epic Mickey, his personality is similar to the rest of the Gremlins in the game. He is friendly and willing to help Mickey as a thank you for freeing him. However, unlike the other Gremlins, he shows a more malicious streak, destroying The Telephone if Mickey allows Prescott to retrieve his wrench himself.

In Epic Mickey 2, he becomes much more bitter and develops a sarcastic streak and inflated ego. He is shown to be more easily irritated and violent towards machines, and believes that no one appreciates his "genius." He later claims he "only wanted to be loved" but as he was under hypnosis during this, it's uncertain how true this statement was.

Forced out of their forest home by the construction of an airplane factory, the Gremlins set out to sabotage the British Royal Air Force's planes in revenge. But after meeting a pilot also Gus and explaining the plight of his people, they strike a deal: Gremlin Gus will reform the Gremlins and now assist in the upkeep of planes in exchange for free food and an untouched forest being set aside for the Gremlins to live in.

Due to the fact that the movie was never finished, Prescott and the other Gremlins lived in the Cartoon Wasteland for many years.

Gremlin Prescott lives in OsTown. Before Mickey's arrival, Prescott got into an argument with the Telephone, which ended with Prescott stuck in the safe above the Gag Factory and the Telephone taking possession of his wrench. When Mickey arrives, he can either paint back Pirate Moody's house, which will result in Moody remembering the combination to the safe or thin out the beam holding the safe. The latter, however, will make the safe fall on Moody.

Prescott will then ask you to get his wrench back from the phone. You can either complete a quest from the Telephone to get him to give it back or give Prescott permission to get the wrench back, himself. The latter will result in Prescott destroying the Telephone as an act of revenge.

"PRESCOTT - Over the years since Disney's Epic Mickey, bitterness and envy crept into Prescott, leaving him a sarcastic curmudgeon. He hardly has a kind word for anyone." - Disney Epic Mickey Video Game Facebook page description.

As seen in the April 2012 issue of Nintendo Power, Gremlin Prescott was confirmed to reappear Epic Mickey 2. He is in OsTown and helps the player(s) on a mission to where they would have to fix three thinner pumps (if you do take his advice, it will work, but supercharging it will cause thinner to go everywhere and thin a few houses).

Unfortunately, as the game progresses, it becomes clear that Prescott isn't exactly on the side of good. Small Pete finds some sets of wind-up teeth stuck in the works of the projectors, which were malfunctioning. Since Prescott was the caretaker of the Gag Factory, the blame lays at his feet.

Eventually, Mickey, Oswald and Gus track Prescott down to his arena deep within the Floatyard. It is there that the heroes take on two of Prescott's more dangerous creations: an automated cannon with Mickey's face (through the good version) before exiting from and battling a giant robot version of himself (the face of the robot could look like a deformed Mickey if the face is thinned away).

Upon stopping the machine, the heroes capture Prescott and proceed to question him on why he has been causing trouble. Prescott mentions that "he" told him that he couldn't be stopped. Sadly, before the heroes can gain more information, The Mad Doctor comes along with a Beetleworx Hopper (which hypnotizes Prescott), Daisy Duck and her camera crew and, after being forced to reveal himself as the mastermind of everything, is taken back to City Hall on Mean Street by Big Bad Pete for questioning. But afterwards, Mickey and Oswald gain some idea of what to do next as Gus discovers that Prescott was a part of a project for the Mad Doctor. If he is visited before the Mad Doctor's defeat, he will be in the jail cells of City Hall, babbling something about "The Wonderful World of Evil" (revealed to be a TV show that the doctor is broadcasting to the Cartoon World from Wasteland).

Prescott (who becomes de-hypnotized after the game's ending) is last seen in the possession of Big Bad Pete, Small Pete and Pete Pan, who clearly have some dark plans in store.

Prescott as he appears in the first game.

Gremlin Prescott with the Mad Doctor

Gremlin Prescott with Big Bad Pete in Epic Mickey 2: The Power of Two 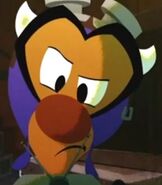