Disney Wiki
Register
Don't have an account?
Sign In
Advertisement
in: Characters, The Jungle Book characters, Disney characters,
and 9 more

Mowgli, his friends, and food

His enemies, Mowgli hurt or in danger, Akela threatening him

Grey Brother is first seen as a wolf cub traveling with his masters, Nathoo and his 5-year old son; Mowgli through the jungle along with British soldiers and other Indian people lead by Colonel Geoffrey Brydon, his daughter Katherine "Kitty" Brydon, and their friend Dr. Julius Plumford.

At night, Grey Brother is seen with Mowgli in a tent during Mowgli's small lesson with his father about animal names in English and Hindi. After Shere Khan, the mighty tiger and jungle law keeper, attacks the camp because two soldiers and one Indian named Buldeo (who eventually survives the attack due to Nathoo's protection and unexpected death because of being left for dead by him) broke the jungle law by hunting animals for fun and pleasure, Mowgli and Grey Brother survive the attack (although thought dead by everyone due to an explosion) but are separated from civilization.

The next day, Grey Brother and Mowgli are found by Bagheera the black panther. Hearing Shere Khan's roar from a distance, Bagheera signals with his tail to Mowgli to grab on to it so as to lead him out of harm's way; realizing he meant no harm to the boy or Grey Brother. It took a bit of a while until Bagheera finally brought Mowgli and Grey Brother to a pack of Indian wolves. Seeing as to how the child Mowgli is young, friendly, helpless, harmless, and kind to a cub of their species, the wolves accept them as members of the pack; much to Bagheera's delight.

Years later, Grey Brother has grown to be a fine hunter and friend to an adult Mowgli and a friendly brown bear named Baloo, who was rescued as a cub by Mowgli on the day Grey Brother and Mowgli were accepted into the pack. One day, when Mowgli's bracelet, a present given to him by Kitty Brydon as children, is stolen by a monkey, Mowgli pursues the monkey with Grey Brother right behind him. When they reach a city filled with monkeys led by an orangutan (later named "King Louie"), Mowgli tells Grey Brother to stay behind while he goes in to retrieve his bracelet.

After triumphing over Kaa the deadly python (King Louie's treasure guardian), reuniting with an adult Kitty, and antagonizing a few British soldiers (including the villainous Captain Boone and one of his men, Lt. Wilkins), Grey Brother is seen lying down with Mowgli and Baloo while he and Baloo are being caressed by Mowgli.

A few days later, after Mowgli has learned the ways of men and re-entered civilization thanks to Kitty and Dr. Julius Plumford, Grey Brother is seen being caressed and introduced to Kitty by Mowgli along with all the rest of Mowgli's jungle animal friends. Grey Brother and the other animals watch as Kitty teaches Mowgli some dancing lessons, much to their amusement.

In a later tussle against soldiers and bandits working for Captain Boone, Baloo is shot and left for dead. Grey Brother and Bagheera are seen running with Mowgli and the wolf pack to locate Dr. Julius Plumford to save Baloo's life; only to find that the doctor had already left with Kitty and her father, Colonel Brydon, to bring Katherine to the ship to England. So, Mowgli goes out and follows them with the wolves and Bagheera behind. After saving Dr. Plumford from death by Buldeo, Grey Brother is seen charging along with the wolf pack and the panther against the Indian bandits. Dr. Plumford is then taken by Mowgli to save Baloo's life.

After Mowgli (who had no choice: either the treasure the villains are after or Kitty and her father's death) is captured by the evil British soldiers: Boone, Lt. Wilkins, and Sergeant Harley and the remaining Indian bandits: Buldeo and Tabaqui, Grey Brother can be seen with the wolves and Bagheera keeping an eye on Mowgli, his friends, and his enemies, while Bagheera stares at Boone and Wilkins mostly.

In the final scene, after Boone's defeat, Grey Brother can be seen continuing his life with the wolf pack in the jungle as Mowgli and Kitty finally share a kiss next to a waterfall.

Grey Brother appears in the live-action 2016 film, voiced by the film's director Jon Favreau's youngest daughter, Brighton Rose. In this version of the film, he is depicted as being a very young, still growing pup and the youngest of Mowgli's adoptive wolf siblings and is referred to only as "Grey" by Mowgli. Throughout the film, he is shown to also be very close to his mother, Raksha and to Mowgli, evidenced by his playing with Mowgli's crafted tools out of sadness when Mowgli has left the wolf pack, and he is the one to warn his mother of Shere Khan's manipulation of his brothers and sisters after Shere Khan takes over the wolf pack after murdering Akela. 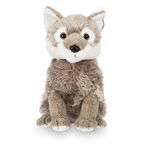