Member of the London Clan
Knight of King Arthur (currently)

Super-strength, gliding
Sir Griff is a minor character from Disney's Gargoyles. After hatching from Knight's Spur, he became a gargoyle and member of the London Clan.

Griff bears a striking resemblance to a griffin, hence his name. He has yellowish skin, a hawk-like beak, feathered wings, and a lion-like tail. He is a particularly adventure-loving swashbuckler, coming close to the embodiment of traditional British heroism. His style of combat is apparently unique with his willingness to use ranged weapons, such as Macbeth's Lightning Gun.

Griff has all the general abilities of his race: enhanced physical attributes, the capacity to rapidly rejuvenate while in stone form during the day, and the power to fly. However, given his feathered wings, Griff has demonstrated some measure of "true" flight, having been seen being able to keep himself (while carrying a human) aloft temporarily in mid-air by flapping his wings like a bird in World War II, though he still needs to find elevated ground in order to glide to even greater heights, as seen in the episode "Pendragon." He is easily one of the best (if not the best) gargoyle fliers seen in the series.

Griff hatched in Knight's Spur with clan-mates, Leo and Una. During World War II, mainly the Blitz and the Battle of Britain, Griff proposed that he and his clan should involve themselves in the war and defend London from the German Luftwaffe, supporting the British Royal Air Force with protecting the British capital from being destroyed by the air forces of the Third Reich in preparation for an invasion by the ground forces of the Wehrmacht. Una and Leo were unconvinced, but a time-displaced Goliath agreed to join him and protect the area. A series of near-death experiences caused Goliath to use the Phoenix Gate and bring Griff forward to the year 1995.

Griff's disappearance caused the London Clan to withdraw further from society, their interest in humans limited to brief interactions in the clan's shop, Into The Mystic. Leo and Una were deeply hurt by the loss of Griff, and bitterly blamed Goliath, the last gargoyle to see him alive. In 1995, Leo and Una trapped the Avalon Travelers, forcing Goliath, who had no idea who Griff was, into the past to discover the truth behind Griff's disappearance. This returned Griff to the rest of the clan, healing wounds decades in the making.

Griff's reappearance stimulated the London Clan's urge to protect the area. He, himself, discovered King Arthur breaking into Westminster Abbey, and joined his service as a knight. Together, the two went on a quest to find Merlin, to no avail.

When England returned the Stone of Destiny to Scotland, Griff, and the rest of the London Clan watched over it with the help of King Arthur, Macbeth, Hudson, and Lexington. 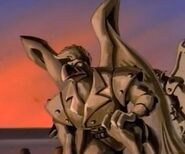 Griff in his stone form.