"Oh-ho! You got a lotta nerve ignoring me, human! The name's Grim. Believe me, you won't forget it!" - Grim (Prologue Chapter One: Stranger Waking)

Grim (グリム) is a character in the Disney video game Twisted Wonderland. He is a magical cat-like monster who is a 1st year student currently enrolled at Night Raven College. He is one of the only two members of the Ramshackle Dorm. Due to his size and the school's anti-monster rules, he and his human companion Yuu (the main player character) both count as one whole student. He is seen as the game's overall mascot.

His basic appearance is that of a bipedal cat with grey fur, with a little white fur patch and pink paw pads. Around his neck is a gemstone that hangs from a black and white ribbon. His eyes are bright blue along with the flames that shot out of his ears. His tail is shaped like a pitchfork at the end. 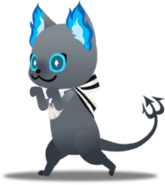 In game sprite during battles

Full-body model as seen in game

In game model before enrollment.

Though story events and specials seasonal events Grim's appearance would change slightly as his ribbon and gemstone would change.

Grim with a Heartslabyul Ribbon.

Grim in a witch costume for Halloween.

Appearances in Other Media

To tie in with the initial release of Twisted Wonderland, a Grim Tsum Tsum was put into the Japanese version of the game. 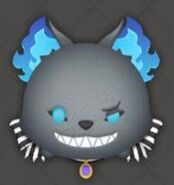 The Comic (Episode of Heartslabyul)

Grim looks near identical to his game counterpart.

Grim in one of the panels

Illustrations used to represent the character's personality, and attack type in battle.

Grim is a mischievous little cat. Throughout the story, a lot of the main problems that he and Yuu get into are caused by his narcissistic, selfish personality, leaving Yuu to solve these problems. His pride can be easily wounded, as simply calling him a raccoon (or weasel in the English version of the game) can set him off in a fiery rage, and because of this he has little to no self control when showing off his powers to anyone who doubts him.

Despite his narcissistic and prideful self, Grim is also very easily impressed by things he is curious about, even if it is common knowledge to everyone else. For example, he was easily wowed by the concept of playing the school's flagship sport, Magshift (or spelldrive in the English version) and having the chance to become famous, as he likes the attention from the people around him.

As the story goes on, however, Grim is shown to lighten up around his friends and Yuu more and more, as his teasing becomes playful rather than mean.

In context of the story Grim can only use fire magic as his main element. It is yet unknown if he has a signature spell of his own.

However, when used in battle Grim is shown to be able to use water, grass, and type-less magic for game-play purposes only.