0 (Audio effects only)
Grizzly River Run is a river rafting ride at Disney California Adventure in Disneyland Resort in Anaheim, California. It is similar to Kali River Rapids at Disney's Animal Kingdom and Roaring Rapids at Shanghai Disneyland. Its name comes from Grizzly Peak, the bear shaped mountain that the rapids flow around which is also the park's icon. It was built by Intamin AG.

On April 30, 2021, Disneyland Resort reopened after being temporarily closed due to the COVID-19 pandemic; however, Disney California Adventure announced that all rides and attractions remained closed.

A legend telling the story of how Grizzly Peak came to be is told on a sign in the ride's queue.

“ Long ago, Ah-Ha-Ee, the Coyote, met Oo-Soo-Ma-Te, the Grizzly Bear on top of the mountain. Seeing the Grizzly was a powerful being, Coyote asked him to watch over and protect the land. Then one day, people came and tried to chase Oo-Soo-Ma-Te from the Mountain. But Grizzly was strong and held his ground. When coyote saw the brave bear standing alone against so many, he turned Oo-Soo-Ma-Te into stone so he could never be driven away. To this day, people claim they can hear the great bear spirit in the wind that roars through the caverns and trees of Grizzly Peak.”
―The Legend of Grizzly Peak

As for the history of Grizzly Peak Recreation Area, a Disney created backstory tells of how German emigrant Jakob Probst discovered gold at Grizzly Peak in the mid-1800s. But far from being a genius, Probst's discovery was by pure chance. Frustrated at failing to get his mule across Grizzly River, Probst threw his hat into the river and trampled it. Picking it up and putting it back on his head, he discovered a one-pound gold nugget had fallen inside. Probst immediately staked a claim he later sold for millions to the Eureka Gold & Timber Company.

Nicknamed "The Pride of the Sierra", the company was a successful business throughout the late 19th and early 20th centuries. Gold was extracted from the mountain and shipped to San Francisco. A company office and adjoining store were built right next door as well. But by the early 1950s the mine was tapped and Eureka Gold & Timber closed down. The structures stood empty for years - only the office and company store remained in use - converted to an outdoor supply store.

The land itself was sold to the government to create the Grizzly Peak Recreation Area. Over the next few decades the land was reborn with trees growing back and rivers clearing up. Eventually, California's rafting enthusiasts discovered the whitewater thrills of Grizzly River and the word got out about the crystal-clear waters and Class V rapids there. By the 1980s, that hobby had grown into a business with several companies offering guided raft trips to customers. One of those companies was run by a savvy young group of entrepreneurs including Bumper McFerrin (a rafting instructor who provided the attraction's safety spiel). They purchased the old mining structures to use as their base of operations, and thus, the Grizzly River Rafting Company was born.

When Grizzly Peak underwent placemaking updates in 2012, the contemporary extreme sports rafting theme was replaced by an effort to push the setting back to a 1950s National Park time period and setting. Keeping this National Park theme in mind, a 2019 refurbishment would finish the placemaking through the use of J. Audubon Woodlore as the new safety spiel voice.

The raft trip around Grizzly Peak begins with the rafts being lifted up a conveyor through the Eureka Mining Company's old mill building, where leaky pipes drip water onto guests. Upon reaching the top of the conveyor, the rafts are dropped into the Grizzly River to descend the peak, passing through a cave where the roar of a bear can be heard and bumping against a log jam. The climax of the ride drops the rafts down into a geyser field. The final drop has a unique element in that the rafts are spun as they begin their descent.

As with all flume-type rides, there must be a location to store or drain the water in the upper sections of the flumes when the pumps are shut down. The original plan was to create a large, underground basin beneath Grizzly Peak to hold water. This would have required costly excavation and construction. Upon looking at the final layout of Disney California Adventure, it was noticed that the Pacific Wharf area had a water element meant to simulate a tidal basin. The tidal basin is located across a walkway from Grizzly River Run and became the catch basin for water from the raft ride. The rise and fall of water in the tidal basin serves the dual purpose of providing a location to store water and being a scenic element that simulates a rising and falling tide.

The ride is one of three in American Disney Parks taking the names of former Opryland USA attractions. A similar ride at the now-defunct park in Nashville, Tennessee was called the Grizzly River Rampage. 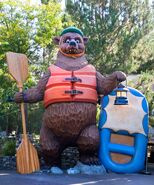