Evronians
Grrodon is a character from the PKNA comic book. He is an Evronian covert agent. He is the last remaining Evronian in the 23rd Century.

When the Duck Avenger is first brought to the 23rd century, Grrodon is disguised as Gordon, the assistant of famous producer and director Ducklas Styvesant, who tricks the Avenger into believing he's needed to stop some Super-Evronians, while he's actually being filmed for a series. Grrodon takes this chance to sabotage the animatronics to have them kill the Duck Avenger, but the hero survives these attempts. After the Duck Avenger finds out about the filming, he accepts to film one last scene, which also gives him the chance to find out who is trying to kill him. When Grrodon reveals himself and tries the direct approach with his Evrongun, the Duck Avenger uses a weapon Odin Eidolon gave to him and deflects the Evrongun's shot. Grrodon tries to escape and Odin Eidolon crosses on his way, so Grrodon shoots him with his Evrongun and it doesn't work. This defeat causes Grrodon a deep despair so he kills himself by stealing a ship without planetary capabilities and flying into space, where it's implied that he disintegrates.

In issue #44, there is a clumsy yet computer-savvy Lieutenant named McCoy, and at the end of the issue he turns out to be Grrodon, who is just beginning his infiltration in the present day (of course, the reader already knows what will happen to Grrodon thanks to the events of issue 5).

In the following issue, Grrodon-as-McCoy has a minor role, selling U.S. secrets to Belgravia in order to alter the equilibrium of Earth afairs, as a confused world is easier to dominate.

Might and Power reveals that after McCoy was jailed for stealing secrets, he became cellmates with Morgan Fairfax and revealed his true Evronian identity to him. After escaping jail, they reunite the Evronian spores scattered around Earth to re-create the Evronian empire, with Grrodon as the new emperor. 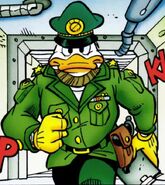 As Lieutenant McCoy in the present day 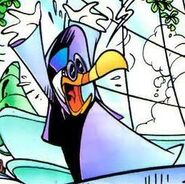 As Gordon in the 23rd Century 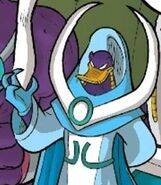 As the new Evronian emperor
Add a photo to this gallery
Retrieved from "https://disney.fandom.com/wiki/Grrodon?oldid=4447466"
Community content is available under CC-BY-SA unless otherwise noted.