Kuzco, Malina, Kronk, the Over Achievers Club members, and his father

Graduated the Academy for the second time, and eventually worked for Kuzco

"Kuzco rules!"
Guaca is a character in the series The Emperor's New School. He serves as a sidekick to Kuzco and deeply admires him.

Since Guaca arrived at Kuzco Academy, he admired Kuzco deeply. This admiration turned into obsession and he would stop at nothing to finally befriend his hero. However, Kuzco was rather stubborn about befriending Guaca, he was a bit freaked out by his obsession, but eventually used his loyalty for his own advantage and thought as Guaca as his assistant and nothing more than that. This didn't upset Guaca since he knew he was lucky to just spend time with his hero, even if he was mainly being used.

As the series continued Kuzco and Guaca grew closer, so close that Kuzco actually began to consider Guaca true friend, however he still wouldn't allow him to hug him or show any physical contact toward him. Guaca still was thrilled to have Kuzco consider him a friend and remained fiercely loyal toward him.

Besides Emperor Kuzco, he formed a friendship with Malina, though he wasn't as close to her as Kuzco, the two spent time with each other very often and at one point he even developed a small crush on her, although the feeling was not mutual and Guaca would never truly ask her out on a date because of his loyalty toward Kuzco. Kronk is considered another friend of Guaca, although it is mainly because of Kronk being forced to spy on Kuzco for Yzma.

Guaca is obsessed with Kuzco. He is very loyal to Kuzco and will do he tells Guaca to. He also tries to impress Kuzco and become closer to him. Guaca is very kind and likes to help others as shown in the episode "Overachievers Club" where he he was raising charity to buy a fountain for senior citizens. Guaca also has a crush on Malina but wouldn't ask her out because he is to loyal to Kuzco. 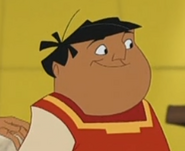 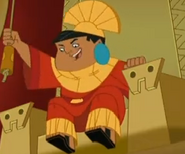 Add a photo to this gallery
Retrieved from "https://disney.fandom.com/wiki/Guaca?oldid=2805045"
Community content is available under CC-BY-SA unless otherwise noted.