Disney Wiki
Register
Don't have an account?
Sign In
Advertisement
in: Pages using duplicate arguments in template calls, Upcoming attractions, Guardians of the Galaxy,
and 7 more

Guardians of the Galaxy: Cosmic Rewind

Guardians of the Galaxy: Cosmic Rewind

Guardians of the Galaxy: Cosmic Rewind is an upcoming steel roller coaster attraction at EPCOT's World Discovery.[2][3][4][5] It will be manufactured by Vekoma.[6] Based on the Marvel Studios' film Guardians of the Galaxy, it will be the first attraction at Walt Disney World based loosely on a Marvel Comics property.[7][8] It will replace the Universe of Energy attraction, which closed on August 13, 2017.[4]

Following the announcement, the attraction will be set to become part of the Wonders of Xandar Pavilion, EPCOT’s very first Other-World Showcase Pavilion.[10]

The ride was announced as part of an overall overhaul of Epcot at the 2017 D23 Expo.[3] On August 13, 2017, Ellen’s Energy Adventure was closed so that construction could begin on the attraction.[11] At D23 Japan in 2018, it was confirmed that the ride would be one of the world’s longest enclosed roller coasters and that the ride would open in 2021.[12]

Construction began in late August 2017. The existing Universe of Energy show building will be reused and retrofitted for the new attraction; the roller coaster itself will be housed in a new, massive show building situated backstage behind the Universe of Energy building and the former Wonders of Life pavilion.[14][15] On May 4, 2018, the Disney Parks Blog released a video stating that 960 truckloads of concrete had been poured for the foundation of the new ride show building.[2]

The name of the ride, Guardians of the Galaxy: Cosmic Rewind, was announced on August 25, 2019, at the D23 Expo 2019.[16] It is scheduled to open in Summer 2022,[17] with filming for the ride commencing in October 2021.[18] Guardians of the Galaxy film series cast members Chris Pratt, Zoe Saldana, Dave Bautista, and Glenn Close with reprise their roles from the Marvel Cinematic Universe as Peter Quill / Star-Lord, Gamora, Drax, and Irani Rael / Nova Prime, respectively.[19] Additionally, Terry Crews would be cast in the role of a Nova Corps Centurion named Tal Marik.[20] The first footage from the ride was unveiled in March 2022.[21]

Looking for a place to establish a peaceful connection to Earth, and at the suggestion of nostalgic Epcot fan Peter Quill, the planet Xandar and its Nova Corps have decided to establish Epcot's first "Other-World Showcase" Pavilion. For their presentation, they have decided to focus on deep space travel, with an elaborate planetarium called the "Galaxarium" serving as a way to give guests a look at the formation of the universe as well as offering a hyperjump visit to Xandar. However, our field trip to Xandar is interrupted when the Celestial Eson, AKA, The Searcher, comes to Earth to reset reality, resulting in the Guardians of the Galaxy coming in to try and defeat him. In the chaos, guests are sent back in time to witness the Big Bang.

Tyler Bates, who composed the scores for the Guardians of the Galaxy films, contributed two hours worth of music for the attraction's queues and pre-shows.[22] A rock instrumental cover of the original Universe of Energy attraction's self-titled theme song can be briefly heard when the Guardians are called in the pre-show and in the first scene of the ride.

A young Peter Quill at Epcot 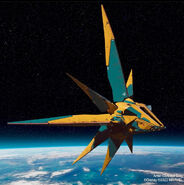 A new villain, Celestial Eson will appear in this attraction