Gubbles is Mickey's pet fish that debuts in the Mickey Mouse episodes "Gasp!", "No" and "Flushed!".

In the short, it is shown that Gubbles has the personality and traits of a dog, including barking, fetching, growling, and eating dog biscuits. He has been taught tricks by Mickey, which allowed him to escape from a cat's stomach.

Gubbles also makes an appearance in the short, "No". Since Mickey can't bring himself to say no, the cat takes Gubbles away (though the fish manages to get away). Toward the end of the episode, it's revealed that Gubbles has found a girl.

Gubbles also makes an appearance in the short "Flushed!", where Mickey mistakes him sleeping as him going belly up, which made him accidentally flush Gubbles and go into the sewers to rescue him.

Gubbles returned in the episode "School of Fish", where he attends his first day at school while Mickey attempts to help him, usually making embarrassing results. 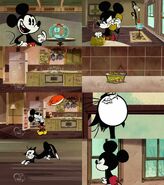 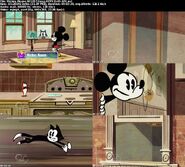