Gugulethu Sophia "Gugu" Mbatha-Raw, MBE, is a British film and stage actress, who is best known for her roles as Kelly in the Black Mirror episode "San Junipero", Dido Elizabeth Belle in the 2013 British period drama film, Belle, and as Noni Jean in the critically acclaimed romantic drama film, Beyond the Lights.

For Disney, she portrayed Plumette in the 2017 live-action adaptation of Beauty and the Beast and Dr. Katherine Murry in the 2018 science fiction film, A Wrinkle in Time. She also portrays Judge Ravonna Renslayer in the Disney+ series, Loki, set within the Marvel Cinematic Universe. 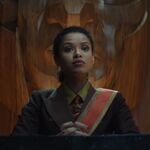 Gugu Mbatha-Raw at premiere of Beauty and the Beast in March 2017.