The Knights of Gummadoon, the Council of Gummies, ordinary Gummi citizens

Still intact
Gummadoon is a magical castle city of ancient Gummi Bears, that appears once every hundred years in the human kingdom of Dunwyn. It appears in the Adventures of the Gummi Bears episode "The Knights of Gummadoon".

Initially only thought of as a fairy tale, even by the present day Gummies from Gummi Glen, a tradition remains to read the castle's story every hundred years, "when the stars are correctly aligned", possibly in order to prepare the remaining Gummies for the castle's reappearance. Gruffi refers to Gummadoon as the "home of the Gummi way".

The castle actually houses a thriving community of ancient Gummies, who aided the Great Gummies in escaping to the three colonies Berryborn, Great Bearton, and New Gumbria when the humans battled them a few hundred years ago.

The Gummadoon Gummies left behind are defended by Sir Plucky, Sir Gumlittle, and the Knights of Gummadoon, and lead by Councilor Wooddale, Councilor Berrybaum, and three fellow council magicians, who made sure to hide the castle from humans throughout time.

During their one day together, Cubbi Gummi is knighted "Sir Cubbi" by the Council of Gummies, a "full Knight of Gummadoon for a day, with all the rights and privileges of that rank". After initially facing hostility from the Knights of Gummadoon, "Sir Cavin" is named a Knight as well, following the young human's rescue of one of their own, and helping the them defeat Duke Igthorn and his Ogres, just in time before the castle vanishes for another hundred years. 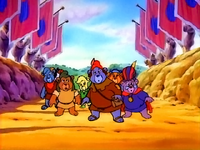 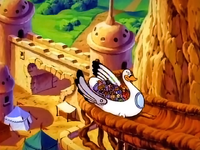 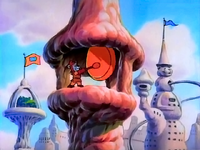 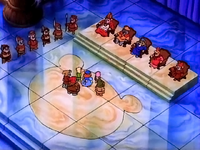 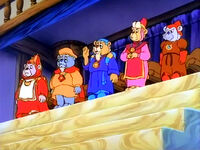 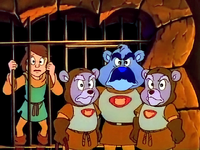 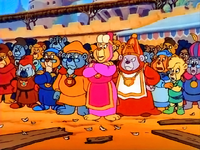 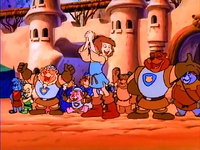 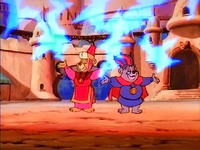 The public square at the entrance of Gummadoon

The jousting square of Gummadoon

Retrieved from "https://disney.fandom.com/wiki/Gummadoon?oldid=4486640"
Community content is available under CC-BY-SA unless otherwise noted.