A Gummiscope is a giant telescope that first appears in the Adventures of the Gummi Bears episode "Light Makes Right". A second Gummiscope is later found in the episode "Return to Ursalia", and used again, in the second part of "King Igthorn", the series finale.

Built by the Great Gummies, it is meant to harness sunlight as a means of long-range communication that could allow them to make contact with Gummies across oceans, like the Gummi Bear colony in New Gumbria. But in the wrong hands, it can also be used as a powerful laser weapon that is capable of destroying an entire kingdom.

Receiving a message from afar

Burning the forest below... 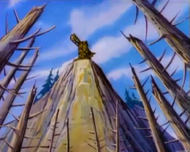 ...leaving a path of destruction

One of the messages received

Retrieved from "https://disney.fandom.com/wiki/Gummiscope?oldid=4476729"
Community content is available under CC-BY-SA unless otherwise noted.